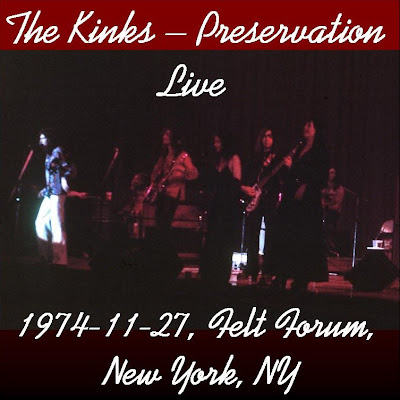 Bonus Kinks! by request. I had intended for the 1996 'Final Concert' to be the last in this round of Kinks posts, but due to the great response and demand for more Kinks, here is one more unforgettable show. I was a little reluctant to post this one initially, because it comes from the Kinks least popular period and albums, Preservation Acts 1 & 2, being the height of their 'theater incarnation'. So, this one may be mainly for the real die-hard fans who want to hear all phases of the Kinks. Anyway, there are very few shows available that feature the full Preservation concert show, which is sort of a rock opera/theater piece, a sprawling chronicle of social revolution, starring Ray as the nefarious Mr. Flash, and Dave as his nemesis, Mr. Black. However, although the albums were initially panned by critics and generally ignored by the public at the time, they have received substantially more respect and admiration in recent years. And the live stage version of the show was always much better received than the albums themselves. So, here's your chance to check out the full stage version of Preservation, with several additional Kinks classics thrown in as appetizers before the theatrical entree.
I should note that I am not certain of the origin of this show. The files I received (from PinkRobert) were identified as being from November 1974, Felt Forum, Chester, PA. However, there is no Felt Forum in Chester, and there is no record of the Kinks playing in Chester in 1974 (They did play there in November 1975 (Widener Univ.), but that would have been a Soap Opera show, not a Preservation show. So, I'm assuming that this MUST be from one of the 2 Felt Forum shows (November 27, 28) in New York City, and since I have only ever heard of there being a recording from the first night (11/27), I am going with the 27th as the date. If anyone has any more definitive or accurate information on this recording, let me know.

thanks. Never too much Kinks.

I was at this show.

Thanks so much...can't wait to hear Pres Acts as a whole, live!

I just wanted to add that there is a VERY good chance this is the show from the Felt Forum! It was the very first time I saw the Kinks, and they most definitely started the show with a short set of their hits before doing a fairly complete version of PRESERVATION!

I can't believe I'm going to be able to hear this again after all these years!

I am over the moon to find one of these Preservation shows. Thanks for the great share.

THE KINKS ARE THE VILLAGE GREEN PRESERVATION ACT 1 & ACT 2

This might actually be from the 2nd Felt Forum night on Nov 28.

I have the actual Nov 27 with this set list