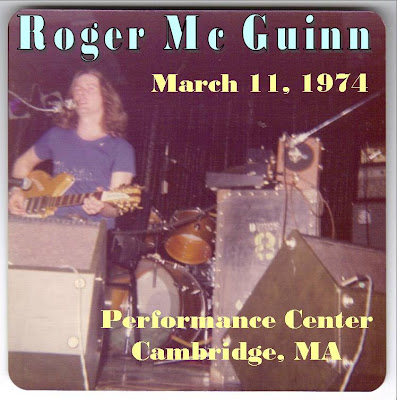 Previously, I have featured members of the Byrds in their various post-Byrds shows and bands (with so much invaluable assistance from David M and his recordings), including Chris Hillman, Gene Clark, Michael Clarke, Gram Parsons, Flying Burrito Brothers, Souther-Hillman-Furay Band, Firefall, etc.), yet, so far I have not featured any shows from the one guy that is most closely associated with the Byrds, Mr. Byrd himself, Roger McGuinn. Well, I'm going to fix that oversight right now. Here, then, is another of David M's previously uncirculated audience master recordings, this one from the first night of Roger McGuinn's series of shows at the Performance Center in Cambridge, MA, in March 1974. Here are both sets from that fine night, with Roger going back and forth between acoustic and electric solo versions of many of his classic songs, as well as a very diverse and impressive setlist of various other gems, with only a few songs repeated between the two sets. A pretty amazing performance. I have not done any tinkering with the sound on these recordings, other than some volume enhancements, so these are pretty much David's raw tapes, warts and all, but overall, pretty good sound quality.
David was also present for a couple of the following nights shows, too, and his recordings for those nights have been previously featured on Rocking-Byrd's private blog. But since that blog was not generally accessible to all, I will also post those subsequent nights shows here, too (over the next week or so), and possibly some more Roger after that. Although the setlists are similar for the different nights, Roger still manages to add in a bunch of different songs for each show.  So, here is Roger McGuinn in 1974.

thanks. looking forward to a good listen

Thanks for posting this show and returning to the Byrds family and friends. I have really enjoyed everything that you and David M have shared. I was wondering if there might be any more Gene Clark shows on the horizon. Thanks again.