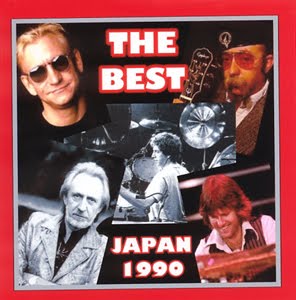 OK, here is a really intriguing oddity. Now, I know that most of the so-called 'supergoup' incarnations don't last very long, or don't live up to expectations, but here is one that came and went and I never even heard anything about them. This show was a shock to me when I came across it recently, as I had no idea such a union ever occurred. This was of interest because it was such an unusual mixture of talent and styles, Keith Emerson and Joe Walsh in the same band, with Skunk Baxter and John Entwhistle? A musical clash fusing early Steely Dan with ELP, The Who, and the Eagles? Wow, all bands I really like, so this looked very intriguing, but a seemingly odd combination of talent. A look at the setlist indicates that they basically played a selection of greatest hits from the bands of each of the members. I read that these were songs selected as the favorites by the rest of the band. And actually, the results are surprisingly good, and well-worth a download and listen.  Fortunately, these are not just mindless covers trying to duplicate the originals, rather the band really seems to take their roles seriously, and contribute some very different and unique versions of the songs, incorporating all the members musical expertise, and stretching out on extended jams. As far as I know, Emerson has never been in a band where his keyboards were not the primary and dominant component. Thus, it is very interesting to hear him in this band with 2 great guitarists, and his contributions on the other's songs (that aren't keyboard-oriented songs). Although on some songs, like 'Life in the Fast Lane' and 'My Wife', it is a bit disconcerting to hear Emerson's constantly moving keyboards in the background, some of his additions are positively breathtaking, such as his skillful piano licks in 'Bodhisattva' and 'Reeling in the Years', or putting everything from the 'Jaws Theme' to classical pieces like 'Night on Bald Mountain' into 'Boris the Spider'. And it is very interesting and exciting to hear Skunk and Walsh combine guitar forces (and different styles) on several songs, like 'My Wife', 'Life in the Fast Lane', 'Too Late the Hero', Reeling in the Years', and especially 'Bodhisattva' (which is probably Steely Dan's best song ever, and this version is truly unique and amazing). We also get other unique offerings throughout, such as epic versions of Emerson's 'Fanfare for the Common Man' and 'America' (complete with extended Entwhistle bass and Walsh guitar solos). It is a bit odd, though, that with all the musical talent here, they didn't bring in anyone who could sing, as they went with an unknown vocalist (Rick Livingstone), who actually does a pretty good job handling the different vocal styles of the various original songs. All in all, this is a very unique and entertaining show for anyone who is a fan of these varied musicians and bands. This was obviously a very short-lived collaboration. I don't know if there was ever any intent for them to do original songs as a band or not, but I'm sure that would have been quite unique, also. In actuality, I don't know if this band ever played anything more than these few shows in Japan. It would appear that this show, recorded for broadcast on Japanese TV is the only musical document that exists for this strange and unique 'supergroup'. But, I am so glad that I did get to hear these unique song versions by 'The Best'. And I hope you like them, too. I got this from TonyR over at the G101 forum, so thanks for making this unique show available Tony! If anyone knows anything more about this band, please let me know. Did they ever do any shows in the U.S. or Europe? or did they just implode after these Japan shows? Regardless, check 'em out, the once-and-only assemblage of monster talent, The Best.

Thanks for posting this show. A very nice listen!

Eager to hear this. It's the kind of thing, if you didn't know it existed, you would find it hard to believe. Did they share management or something? How else did this combination come about? Fascinating. Thanks for posting!

The only connection I could think of is they all played, at one time or another, in Ringo Starr's All Star Band. This could be a one-off of one of those tours, perhaps. Would be curious to find out more...

I was completely blown away listening to this recording!
A very pleasant surprise indeed!
Thanks for posting...A+

Wow, how did I miss this one? Great show! Thanks!

Killer! I've been looking for this
Many thanks!

Still crazy after all these years! MEANING: THANK GOD, and BB, the linx still wurks. Hotfile now blows cold as well as HOT. so goes the world of the download. I have a feeling how the Conquistadors felt... hard business, harder to find the gold. Most of the places are now in ruins. Circa 2013.

HAPPY NEW YARDARM ALL YE PIRATES AND PILATES, it's a new year, a new chance to be the person you always wanted to be... not perfect, just more mused and ...

OK, big big BIG thanx for all you do, for us, and HEY, I THINK THIS AMAZING JEWEL OF THE SPHERES IS JUST ABOUT READY TO UNrar.

please repost this show!
Many Thanks