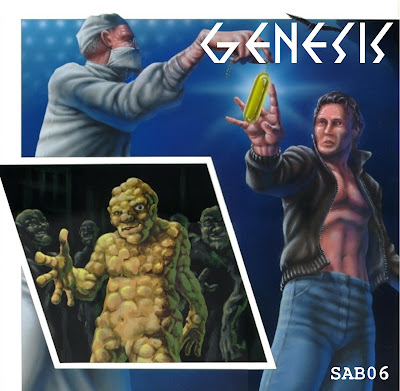 OK, I know that so far all the Genesis I've posted has been in Lossless format, and that is basically because I always try to post stuff in the best quality that I have (and since Genesis is one of my very favorites I try to get the best quality out there). But, I am certainly not opposed to mp3 as a format, as it can be very useful. And I know that there are many out there who just don't use lossless because of the huge size and space requirements. So, anyway, I will try to share at least a few Genesis shows in mp3 before I move on to other things. I also have not yet posted a show from the great Lamb Lies Down on Broadway Tour, primarily because just about all the good shows are already readily available on the other blogs previously mentioned. But I have found a show that can rectify both of these situations. So, here is a great soundboard recording, one of the very best available from the Lamb tour, and one that is not currently available in mp3 at T.U.B.E . Most Genesis fans generally consider this album and tour as the crowning achievement of Genesis, their masterpiece, a bizarre and stunning vision (both musically and visually). Personally, although I too think it is a magnificent masterpiece, I still prefer Foxtrot and Selling England by the Pound overall (I always had trouble with disc 2 of Lamb, it just can't sustain the excellence of disc 1, or compare with their previous masterpieces), but that's just my preference. As a stage show, Lamb was certainly unprecedented as a musical spectacle. For Gabriel, this was his Swan Song with Genesis, and a magnificent one it was, as he left the group shortly after this tour. So, please enjoy The Lamb Lies Down on Broadway, Live, in all it's glory.

A different remastered version of this same show (BURP-009) is available in Lossless at Quality bootz HERE , as well as about 10 other high quality shows from this tour (Find them here).