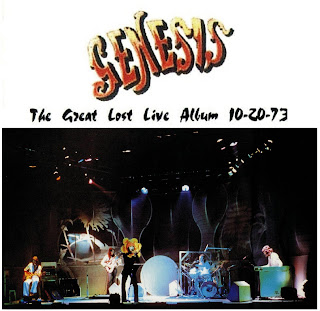 Here is another great show from the Selling England by the Pound Tour, an excellent FM broadcast recording, originally broadcast as a KBFH show, but re-broadcast several times since then (most notably by WXRT in Chicago). This is a very well-known Genesis bootleg (and BTW, it never was 'Lost', but it is 'Great'), and this particular version is special because it also includes the missing song 'The Cinema Show', which was not included in the original broadcasts, and is not found on most of the bootleg recordings out there. However, for this version 'The Cinema Show' has been found (thanks to Eeklair source) and put back in it's rightful place in the concert order. So, even if you already have this show, it probably doesn't include the added 11 and 1/2 minutes of the sensational 'Cinema Show'. This is a marvelous document of a classic Genesis show. Enjoy!

Sorry, but this show has now been officially released, as part of the Genesis Live Box Set. The 'live' box set includes all of the previously released official live albums, and adds the complete 1973-10-20 Rainbow Theater show for the first time as a new official release. Thus, it is no longer available as an unofficial bootleg download, and the download link has been removed. Sorry.
Posted by BBKron at 1:50 PM