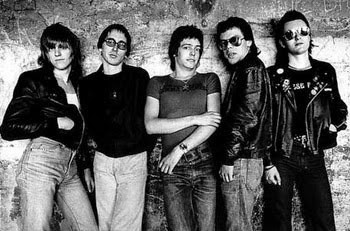 Here's Eddie & the Hot Rods, one of the later, more aggressive, harder-edged Pub Rock bands, during their first US tour, in which they opened a show that was billed as "New Wave In New Jersey" that featured The Talking Heads and The Ramones. This was after they achieved some success with their 1977 single 'Do Anything You Want To Do' reaching the top ten in the UK, and was in support of their second album, Life on The Line. Here, you can hear the move toward a more punkish sound and style, yet their pub rock roots also remain prominent.
The band started in 1975 (from Canvey Island, just like Dr. Feelgood), and worked their way up from the pubs to semi-stardom in 1977, but just never quite caught on in the US, and although they continued to try for several years after, this was as famous as they would get as they never again achieved the level of success they had here in 1977, but they could definitely rock it. So, by this time, Pub Rock was pretty much over as a musical scene and movement. But the music lives on.