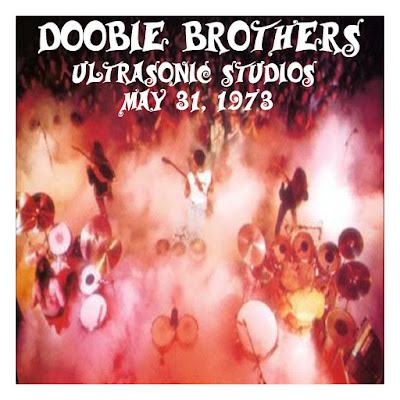 Let's continue with a theme of radio-friendly '70's bands. Here's The Doobie Brothers! The band was originally formed in 1970 when singer-guitarist-songwriter Tom Johnston and drummer John Hartman teamed up with singer-guitarist-songwriter Patrick Simmons and bassist Dave Shogren. They never actually wanted or intended for the name of the band to be The Doobie Brothers, but they were having trouble deciding on a name for their new band and were jokingly dubbed The Doobie Brothers by a musician friend, and thus used that for few early gigs. Although they always planned to come up with a better name, they never did, and the Doobie Brothers stuck. The band featured hard-driving dual electric lead guitars, three-part harmony vocals, and strong drumming, and soon established themselves as an up and coming band in Northern California, and a record contract with Warner Brothers followed. Their first album (The Doobie Brothers-1971) didn't quite capture the drive and energy of the band, being more acoustic, but it was a strong start. Later in 1971, singer-songwriter-bassist Tiran Porter replaced Dave Shogren, and they added a second drummer, Michael Hossack, which cemented the classic early lineup. The band's next album, Toulouse Street (1972) was their breakthrough, with the radio hits 'Listen to the Music', 'Rockin Down the Highway', and 'Jesus is Just Alright' and a solid album of songs. But their third album, The Captain and Me (1973) is what I consider to be their masterpiece, a near-perfect pop-rock album, just great from start to finish. With both Johnston and Simmons being top-notch singer-guitarist-songwriters with different but complementary styles, Johnston being more of a rocker, with a gritty R&B sound, and Simmons with a more laidback fingerpicking, they mesh and interplay perfectly with Johnston's hard-driving guitar rockers like 'Long Train Runnin', 'China Grove', and 'Without You', perfectly balanced with Simmons' acoustic beauties like 'South City Midnight Lady' and 'Clear as the Driven Snow'. Add in some funk, great harmonies and melodies, and it is just a classic '70's album. Their next album, What Were Once Vices are Now Habits (1974), continued their winning streak, with more big hits ('Black Water', 'Eyes of Silver', 'Another Park Another Sunday') and another strong album. There were however some changes in the band, as Michael Hossack left and was replaced with Keith Knudsen, and Jeff 'Skunk' Baxter (Steely Dan), who appeared as a session player on previous albums, joined the band full-time (due to the transition of Steely Dan from a real band to Becker-Fagen and session musicians). Also, by the end of 1974, after completing recording for their next album, Stampede (1975), Johnston's health  rapidly declined, needing to be hospitalized for bleeding ulcers and needing to take an extended break from the band. This would result in some major changes in sound and direction for the band in the coming years. But that is another story for another time. Today we focus on the those early glory days with Johnston and Simmons et al, and this great rockin' set from the Captain and Me tour.

awesome . thanks. personally I thought micheal mcdonald ruined a great rocking band. Can't stand his era stuff. Saw them twice in the last 5 years and they are still great.