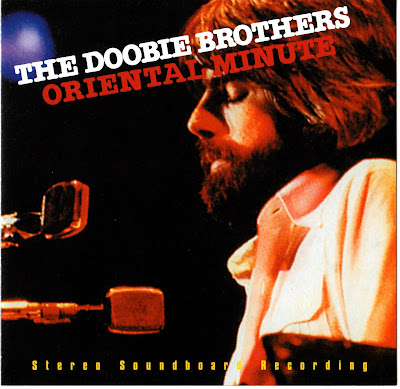 Here's one more from The Doobie Brothers, this time from the peak of the Michael McDonald years. As mentioned in the last post, Michael McDonald was brought in as a last-minute replacement for the ailing and hospitalized Tom Johnston in order to finish their 1975 tour. But Johnston was still sidelined and needing rest in 1976 when the band was preparing for their next album. And since Johnston was also one of their primary songwriters, they were in need of substantial additional material to record. So, McDonald, who had a bunch of demos of songs he was working on for himself, brought his songs to the band, became a full-time member and the band moved on from there. However, McDonald's songs, style, and groove, with his more laid-back, blue-eyed soul, jazzy style and soft- spoken vocals were very much different from the previous signature sound (Johnston's hard-rockin' guitar songs) of the band, but they made it work. The album, Takin' It To The Streets (1976), debuted this new form of the band, and was quite successful, with two of McDonald's songs, 'Takin It To the Streets' and 'It Keeps You Runnin' becoming radio hits. BTW, Tom Johnston did write, play, and sing lead on one song, as well as share vocals with Simmons on one other song, but that was the extent of his involvement on the album. Whereas McDonald's songs and style dominated, bringing a different sound to the band, in general, their success continued undaunted. By the next album, Johnston was back, and participated in the recording sessions early on, but the band dynamics had changed and Johnston left during the sessions and the band carried on without him. Although Johnston wrote and recorded 5 songs with the band, none of them were put on the new album, Livin on the Fault Line (1977), which further cemented McDonald's lead role in the band. The next album, Minute By Minute (1978) became their most successful album, reaching No.1 in the Us and Canada, and hit singles 'What a Fool Believes' and 'Minute By Minute' (both McDonald songs). However, the huge success of the album was marred by internal turmoil within the band, as guitarist Jeff Baxter, drummer John Hartman, and percussionist Bobby LaKind left the band in early 1979. The band would make only one more album, One Step Closer (1980), before disbanding following further departures of Porter and Simmons. There would be various reunions in the late '80's, 90's, and beyond, but the glory days were over by the '80's. The show posted here is a great soundboard recording from early 1979, among the last shows to include Baxter and Hartman, and featuring a greatest hits of McDonald's songs, as well as songs from earlier in the band's career. A fine example of the band at the peak of the McDonald years.