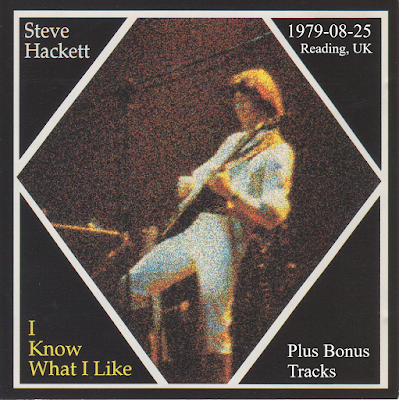 Moving on from Mike Oldfield, here we have another exceptional and innovative progressive rock guitarist who had his own unique outlook, vision, and direction for his music throughout his career. Steve Hackett, best known as guitarist (and songwriter) for Genesis from 1970-1977 (their golden years), also has had a stellar subsequent solo and collaborative musical career, pursuing many musical styles and directions, from progressive and straight-forward rock to classical, jazz, blues, and everything in between. Steve was a major part of the classic period of Genesis, writing and performing on all the albums from Nursery Cryme (1971) through the Seconds Out Live Album (1977). After recording and releasing his own solo album, Voyage of the Acolyte (1975) while still a member of Genesis, and enjoying the freedom and creative development it provided, he started to feel constrained by his more restricted role in the band. Wanting to explore more and varied musical styles and feeling frustrated with the band not incorporating and using enough of his ideas and songs, he left near the end of 1977 (and although many Genesis fans point to the loss of Peter Gabriel in 1975 as the critical change for the progressive status of the band, I would argue that the band weathered that change fairly well, and that it was the loss of Steve Hackett in 1977 that radically changed the direction of the band to a more pop-oriented style). Steve's first album after leaving Genesis was Please Don't Touch (1978), which was recorded in the U.S. and featured various guest artists and session musicians, including vocalists Steve Walsh (Kansas), Richie Havens, and Randy Crawford, as well as drummers Phil Ehart (Kansas), Tom Fowler, and Chester Thompson, and violinist Graham Smith (Van der Graaf Generator). However, for his first solo tour (1978) to support the album, he needed to put together a touring band, which consisted of his brother John Hackett (flute), Dik Cadbury (bass), Nicj Magnus (keyboards), John Shearer (drums), and Pete Hicks (lead vocals). This core group of musicians went on to be his recording band for his next two albums, Spectral Mornings (1979) and Defector (1980), as well as his touring band. Spectral Mornings, in particular, is an excellent album, and one of his most popular, with a variety of eclectic and progressive songs and styles. Featured here are some performances from the Spectral Mornings tour (1979). The FM broadcast from the Reading Festival performance is very good, but unfortunately pretty short (around 45 min), so I have supplemented that with some bonus tracks from the same period, from the FM broadcast of the Drury Lane London show, and a couple tracks from a 1978 Paris show, to round out the concert to a full CD length.

Note: For some reason, the original bootleg of the Reading show (titled 'I Know What I Like') was terribly tracked, with the songs 'Every Day', 'Tower Struck Down', and 'Spectral Mornings' split and broken up into incoherent pieces. An additional track, 'Octagon' was also indicated between 'Every Day' and 'Tower', but this was actually just the ending part of 'Every Day', whereas it should have been 'Optigan' (named after the Optigan rudimentary synthesizer used), which was briefly played at the beginning of 'A Tower Struck Down'. I found these tracking discrepancies very annoying, so I have fixed the tracking and put the songs back together properly, which resulted in there now being 7 songs instead of 8 (but the entire show is included).

Thanks for this - not heard it in ages (possibly since it was originally broadcast!)
Track 1 is actually "Please Don't Touch".
The first minute and a bit of Track 4 was actually called "Optigan" - named for the instrument on which it was played - https://en.wikipedia.org/wiki/Optigan.

Nichloas,
Yes, you are correct. I didn't check that, but it is not surprising since the original maker of this recording had several of the tracks wrong. Thanks for the correction.

Downloads from the links above appear to be no longer available, so please could someone upload the files to a new location and then notify everyone of the new download links?
Many Thanks.