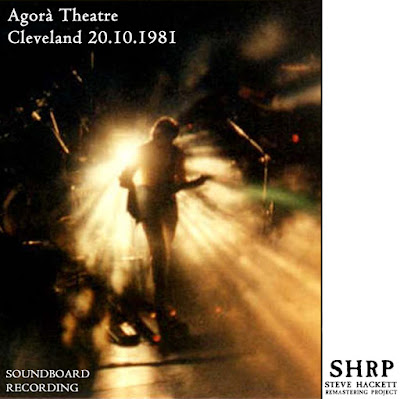 Continuing with virtuoso progressive guitarist Steve Hackett: After the success of Spectral Mornings (1979) and its subsequent tour, Steve followed up with Defector (1980), which became his highest charting album in the UK. After that he followed with somewhat of a change of pace, with Cured (1981). First, for Cured, Steve changed his backing band, keeping only keyboardist Nick Magnus (and his brother John) from the previous group, and used mostly programmed drum tracks throughout (It was essentially a multi-layered duo of Hackett and Magnus on most songs). In addition, although previously Steve had mostly relied on other vocalists to sing lead, he did all the lead vocals himself this time. And although Cured still displayed plenty of progressive rock, it also featured shorter songs and a more upbeat pop-rock style. The result was a refreshing change of pace providing many new songs and more emphasis on vocals. For the Cured tour, Steve added a new bass player and drummer, and hit the road. The show featured here is a great soundboard recording from his 1981 American tour, and in addition to popular songs from the earlier albums, Steve added 4-5 new songs from each of The Defector and Cured albums, resulting in a great show and great song selection. I added an additional Cured song from another show on the tour as a bonus track, as this song was only played at a limited number of shows.

Wow, thanks for the 2 Steve Hackett shows, the only time I saw him was 1980/81, in the UK, so bringing back some memories, thank you.