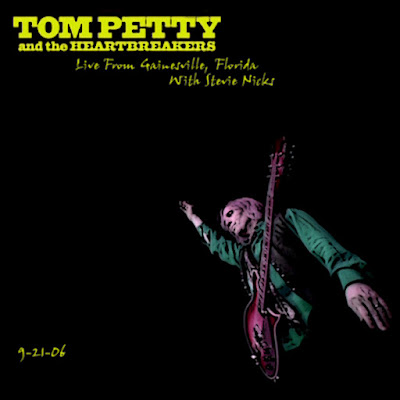 Continuing with our Tom Petty retrospective: After The Last DJ album and tour (2002-2003), Petty's next album project was another solo album, his third, and for this one he went back to his Traveling Wilburys co-hort, friend, and producer Jeff Lynne, who he had not worked with as a producer since Into The Great Wide Open (1991). And for this album, instead of using the Heartbreakers and other guest musicians, Petty, guitarist Mike Campbell, and Lynne actually played all the instruments on all the tracks. The result was Highway Companion (2006), another quality album, although perhaps not quite up to the heights of Full Moon Fever and Wildflowers, but a very good album nonetheless. Also during this time, Petty and the band were working with Filmmaker Peter Bogdanovich on a retrospective documentary chronicling the history of Petty and The Heartbreakers, to mark the 30th Anniversary of the band. The film culminated in what was designated as the 30th Anniversary Concert, held in Petty's hometown, Gainesville, FL, and which also featured Stevie Nicks as a special guest. This concert, which was broadcast live on the radio, and also filmed, was later included in some deluxe versions of the film on DVD box sets. The film was eventually released in 2007, titled Runnin' Down a Dream, premiered at the New York Film Festival, and had a running time of nearly 4 hrs. It is a great document of the band, contains many interviews and great concert footage, and actually needed the 4 hr runtime to do justice with the band and its history. Note: it was in making the documentary, and reliving all the old stories of the band, that rekindled Petty's interest in his original band Mudcrutch, and lead to him reviving Mudcrutch as his next musical project. So, anyway, here is the Gainesville 30th Anniversary concert (which I have posted previously, but now also available in a FLAC version). More info on the concert is available in the original post here. Notably, Petty only included one song, 'Saving Grace', from the newly released solo album (Highway Companion) at this or any of the other shows around this time, as he apparently wanted to highlight his history with the band, and other than Mike, the Heartbreakers were not included on the new album sessions. However, he did include several songs from his other solo albums, as well as other songs with Stevie. Overall, a fine show, and a very enthusiastic hometown crowd.

Thanks...however, as of about 1 pm US PST, the mp3 version is no longer downloadable. Especially since you say it is the clearer version, I'd love it if you could re-up!

Sorry but that version is no longer available. I received a DMCA takedown notice for copyright infringement for it through Mega from Warner Music. I'm guessing that that version must have been taken directly from the DVD of the concert (unbeknownest to me, I thought it was just a really good broadcast recording), which is copyrighted. I think the FM broadcast recording (FLAC) is still OK to post here, as it was not taken down. Sorry for the confusion, i will post an mp3 version of the FM broadcast as soon as I can get to it. thanks.