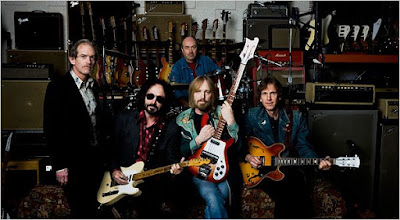 Continuing with Tom Petty's musical history and tour chronology: Inspired by all the old stories and memories stirred up during the making of the Petty Documentary film Runnin' Down a Dream (2007), Tom wanted to re-connect with his old bandmates from Mudcrutch, his earlier pre-Heartbreakers band in Gainesville, FL. But more than just re-connect and reminisce, Tom wanted to plat with them again, and decided to reunite the band and make new music together. So, Tom took the very unusual step of leaving his current, very successful band The Heartbreakers (at least temporarily), to re-form his earlier, unsuccessful band, Mudcrutch. Now, it helped that the core of Mudcrutch,Tom's 2 closest friends and bandmates for over 30 years, Mike Campbell and Benmont Tench, were also the core of The Heartbreakers. The other components were Tom Leadon (brother of Ex-eagle Bernie Leadon), co-lead guitarist and vocalist, and Randall Marsh on drums. For Mudcrutch, Petty returned to his former role with the band, as bass player and vocalist (no guitar at all). Mudcrutch had more of a country-rock, folk-rock background, as well as traditional rock n roll, and that is what they went for. I've told the story of Mudcrutch before, so for more on the early days of the band, see here and here. Anyway, in 2007 they reconvened to work on a new album featuring a mix of old (traditional) and new songs. The result was the self-titled album, Mudcrutch, released in 2008. Although Petty wrote and sang lead on most of the songs, Tom Leadon and Benmont Tench each wrote and sang lead on at least one song. Although the album was more 'country' than anythng Petty had ever released, and contained multiple songs with a bluegrass feel, the album was a major success, and was bolstered by the single 'Scare Easy'. Petty with Mudcrutch only did a very limited tour (only covering several dates in in California) that year (2008). All Mudcrutch shows were at smaller venues, and only Mudcrutch songs were played (that is, none of Petty's more famous hits mixed in). Later that year, a Live EP, Extended Play Live! was released featuring a handful of songs from that tour. After that, Petty returned to his 'day job' working with the Heartbreakers, and that seemed to be the end of Mudcrutch again, a wonderful little musical diversion, than back to business. However, it worked so well that several years later, Tom went back to his old band once again, for another new album and another round of fun with Mudcrutch 2 (2016).
Anyway, here is one of those shows from the very short Mudcrutch CA tour in 2008. This is an audience recording, but a very good one at that, very nice sound. They play their entire album, as well as some other classic roots rock covers. Enjoy!

much appreciation for your tom petty tributes and shows. mudcrutch is great,tom will be greatly missed always.dont think ill ever get over this one.tom was so much a soundtrack of my life and many others im sure.