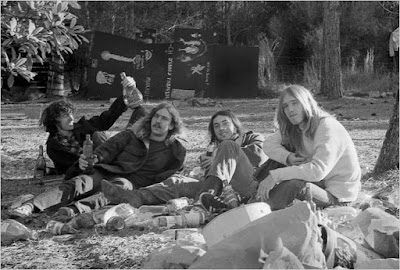 In response to a recent request, I dug out this collection of demos and outtakes from the early days of Mudcrutch and Tom Petty's initial aborted solo project. And since this contains some very interesting relics from the past in the careers of the revived Mudcrutch band and Petty himself, I decided to go ahead and post it here for all to enjoy. As most probably know now, Mudcrutch was Petty's band in Gainesville, FL, before the days of The Heartbreakers (although core members Mike Campbell and Benmont Tench were in both bands). After several years making the rounds in central Florida, in 1974, they packed up their van, and armed with a demo tape, headed out West to find fame, fortune, and a recording contract. They made it as far as Tulsa (and ultimately L.A.), where they hooked up with Leon Russel's Shelter Records, and began recording some tracks for an eventual album. However, things didn't work out, the album never happened (the only released product from that association was an unsuccessful single, 'Depot Street'), and by 1975, the band was dropped and quickly split up. However, Shelter was still interested in Petty by himself to make a solo album, which he started to work on, but it just wasn't coming together without a solid band behind him. On a trip back home to Gainesville, Petty checked out the new band Campbell and Tench was putting together, and that group just felt right to Petty, and they became The Heartbreakers and Petty's permanent band. So, the solo album was dropped and Tom Petty and The Heartbreakers began fresh. So, this collection contains remnants from the original Mudcrutch Demo tape (circa 1973-1974) that the boys brought with them on their journey West, some tracks from their recording sessions at Shelter Church Studios (including a rare Danny Roberts vocal track), as well as some songs from Petty's solo album sessions (1975). However, not all the songs presented here are actually from that period (10 of the 15 tracks are), as there are also several songs that come from The Heartbreakers sessions in and around the album You're Gonna Get It, which are from around 1977-1978. So, although not all Mudcrutch related stuff (some Hertbreakers, too), this is a very interesting set of songs that for the most part never were developed or followed up on any further. Recording quality varies greatly, but most of the tracks have surprisingly good sound. Certainly a must for any fan of Tom Petty, Mudcrutch , and the Heartbreakers.

Looking forward to hearing this. Thanks.

Looking forward to hearing this. Thanks.

Hello,
Great to have outtakes and see the work in progress. Many thanks for sharing. Congratulations for your blog.
Best regards,
Robert