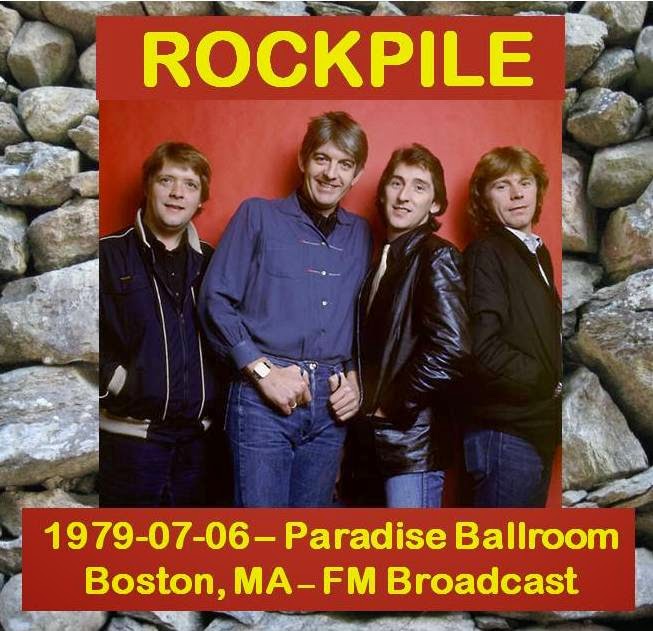 And so now it all comes back to Rockpile, certainly one of the greatest of the pub rock bands, and just a great band all around. I've chronicled the Rockpile story previously, so won't go into it again, but the combination of Nick Lowe and Dave Edmunds together, their superior songwriting melding with their driving rock spirit and firm grasp of music history and style, and with the able backing of Billy Bremner and Terry Williams, they were just awesome. So, here we have a radio broadcast concert from Boston in 1979. This is several months later than the last Rockpile show I featured (10-24-1978 - NY), and comes at a great period for the band, as it is right on the heels of the release of both Dave Edmunds' Repeat When Necessary and Nick Lowe's Labour of Lust albums (both of which are among their all-time best albums, and both are really Rockpile albums), so this show adds in new several songs from those albums, that were not heard at earlier Rockpile shows (Interestingly, though, 'Cruel to Be Kind' (which would be Nick's biggest hit) had not yet become a hit, and was not played here). So, here, once again, is the legendary Rockpile in their prime, and as a bonus, this show also has Martin Belmont (from The Rumour) as a guest guitarist on 'They Called it Rock'. Enjoy.

Guest: Martin Belmont (The Rumour) plays guitar on track 15, 'They Called It Rock'.

Anytime I can get my hands on quality Rockpile it's a good day! Thanks so much for sharing this Gem!

I liked the song "Teacher Teacher" so much I went out and bought the "Seconds to Pleasure" cassette, but I had no idea who they were. Except there was a note about the last 5 songs: "Nick Lowe and Dave Edmunds sing the Everlys". I became a fan for life. That's yet again for a great upload.

If the E Street Band can get into the Rock and Roll Hall of Fame, so ought The Rumour!