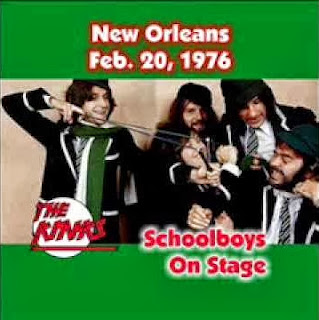 
Here's some more Kinks, and, once again, I feature a tour or period that I haven't covered yet. This is from 1976, the Schoolboys in Disgrace tour, from which there are very few available recordings. As fans know, the mid-70's were what has become known as the musical theater years for the Kinks, as they expanded the band by adding horns and whatnot, and put all their efforts into elaborate concept theater pieces or 'rock operas'. These included Preservation (Acts 1&2, 1973-74), A Soap Opera (1975), and their final theater production, Schoolboys in Disgrace (1976). Interestingly, Schoolboys was actually a sort of prequel to the preservation story, as it followed the early days of the villain from Preservation, Mr Flash, and how his Schooldays experiences shaped him into the villain he became. Not surprisingly, though, this was the Kinks least popular period with fans, as the theatrical styles, stories, and production, left most of their 'rock' fans just shaking their heads in dismay. And although the albums did not do well during this period, their live shows were always great and something to see. In retrospect, however, all these shows and musical productions show immense creativity, imagination, and musical diversity, and really are impressive achievements that have begun to be better appreciated in more recent years. And Schoolboys, in particular, has remained a favorite of many from this period, as it was something of a transition from the Music Hall productions back to their rock roots. Schoolboys contained a number of quality rockers that seemed to signal their return to a more straight-forward rock style, most notably, 'The Hard Way', and one of my all-time favorite Kinks songs, the vastly under-appreciated classic 'No More Looking Back'. Plus, since Schoolboys was only a single album (as opposed to the epic Preservation, which was 3 discs in length), they could do the entire Schoolboys show, plus leave plenty of time to cover many of their classic songs in concert. So, the Schoolboys tour was in many ways a return to form for them. However, as most know, The Kinks were dropped by their label, RCA, after Schoolboys, and were signed by Arista Records, who strongly encouraged the group to go back to a more stripped-down band and stronger rock sound, which they did, and lead to a rejuvenation of the group and a return to prominence and commercial success, as well as a string of great albums, lead by Sleepwalker (1977), one of their very best. This show, from Tulane University in New Orleans, starts off with a rousing selection of previous hits before they get into the Schoolboys saga, which they play in its entirety. The recording, unfortunately, is not that great, but it is the best I have heard from this tour. So, here, once again, is the Kinks, with their production of Schoolboys in Disgrace.