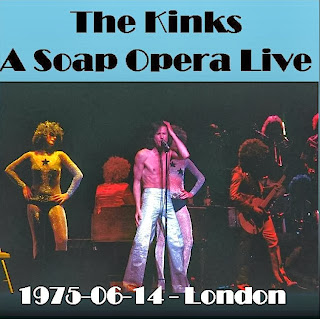 While we're covering The Kinks Musical Theater days, here is their other theatrical stage show from that Mid-70's period, A Soap Opera. However, unlike most of their other concept musicals, which told their story exclusively through the music, as a sort-of rock opera, this show is more of a direct Musical Theater Stage show, in that in addition to the songs there is also quite a bit of story and dialogue, like an actual musical play. Not surprisingly, this was not received well by The Kinks more rock-oriented fans. However, as musicals go, this was actually quite a good story that worked very well. And musically, although not as rockin' as most would like to see, it still had some excellent songs, including the Bonafide Kinks classics 'Everybody's A Star', 'Face in the Crowd', and 'You Can't Stop The Music. And again, few recordings are available from this period, and many of the available recordings of shows from this tour only include the songs and eliminate much of the between song story and dialogue. I have tried to get the most complete version of the show I could find, to get the full experience, and this one is nearly complete as far as I can tell (it may be missing one more dialogue section between 'You Make It All Worthwhile' and 'Ducks on the Wall'), and chronicles the whole show (Note: Apparently 'Holiday Romance', which was included on the studio album, was not included in the live production, as it didn't really fit in with the story). By the way, video footage of the whole show, from a Granada TV special they recorded around this time, is available and can be seen on youtube, or downloaded from some video sites, in case you want to 'see' the show (and Ray's acting job), too. But anyway, here is the last piece of the The Kinks days as Music Hall performers in the Mid-70's, before they went fully back to rock mode in 1977 and beyond. Worth checking out.

Thank you so much for finding yet more great unreleased Kinks music--and all the other wonderful stuff.

Thanks for sharing these slightly left-of-center Kinks' shows. (Personally, I loved 'Schoolboys in Disgrace'.)

Thanks for the show! Is there any chance that you own a lossless version? If so, could you post it?

Sorry, but I do not have this in Lossless, nor have I seen it available on other sites.

Thanks for the response. I'll keep an eye out for one if it comes out.