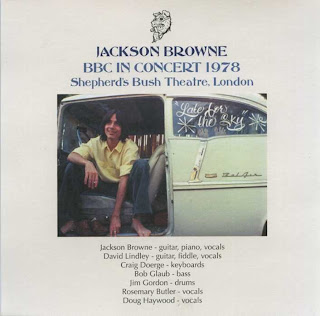 Here's one more Jackson Browne show from the '70's to wrap up the summer and the holiday weekend, this one from Jackson's Running On Empty Tour in 1978. For his 5th album, Jackson planned to do a live album, but a live album that was different from any other. Rather than just release live concert versions of his hits, Jackson wanted to do all new material, and what's more, he envisioned not just a live album, but a concept album specifically about Life on the Road for a touring rock band, recorded completely on the road. And that's what he did. Running On Empty consisted of all previously unreleased songs (some original, some covers) that all dealt with some aspect of being on the road, recorded on stage at shows, backstage, in hotel rooms, and even on the tour bus while driving from Maine to New Jersey. It was a brilliant concept, excellently executed, and once again, with great songwriting. At the time it was released in late 1977, (and perhaps because of the inclusion of some cover songs) some didn't quite get it and dismissed it as Jackson's least ambitious album, or Jackson-lite, but it went on to become the biggest album of Jackson's career, and lead by such iconic songs as 'Running On Empty', 'Love Needs a Heart', 'You Love the Thunder', and 'The Load Out'. The song 'Running On Empty', in particular, really hit a nerve and captured a feeling in people, becoming an anthem of our troubled times. In this fine-sounding BBC radio show from the subsequent 1978 tour, the core songs from Running On Empty (7 songs played) provide the bulk of the show, including the album and show finale of 'The Load Out-Stay', with just a few of his earlier classic songs included. So, as the summer winds down, hit the road with Jackson and Running On Empty.

I wondered if you have the contact details for Rocking Byrd from the blog of the same name?

I would be very grateful!

Many thanks for sharing the shows of a deserving musician I had half-forgotten about.

Thanks. Yeah, at the time was considered a letdown. And I guess it is compared to the material on the earlier LPs. Buy my gawd is "Running On Empty" a great recording or what? It's one of those songs still played constantly on oldies radio (aka "classic rock") that I don't mind hearing as I flip through the dial.

I just wanted to thank you sincerely for making this recording available.

I first learned of Jackson Browne through an event in the Netherlands called the Top2000, which runs on a radio station nonstop from christmass until new year's eve. The song 'Load out / Stay' quickly became a favorite of mine, but after looking the song up through legal channels I discovered that the Top2000 version was a live version. I eventually found the right version on youtube, but a while ago it was taken down. I am very happy that I was able to find your site, because I have not been able to find any other way to get this particular live version of one of my favorite songs.

I did discover during my search that the 'BBC in Concert - London' is actually a misnomer. The recording is actually of a Concert held at the Marriweather Post Pavillion in Columbia, Maryland. Apparently the BBC broadcasted it at some point, at which point their name would've become attached to the recording.

Very interesting - and fine sound quality. Thank you for taking the trouble to make it available. Cheers!

Thank you very much.