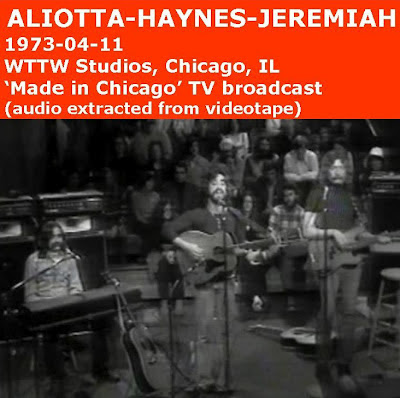 As indicated earlier, here is an alternate audio source for the same Made in Chicago Live TV broadcast previously made available here, featuring these two great Chicago area artists of the 1970's. The date has been updated to the original broadcast date for the show, according to the archivists at fuzzymemories,tv, (I would've sworn it was from 1972, but they seem to know their stuff), who are responsible for finding the rare video footage from this classic show. Please see the previous AHJ and Bill Quateman post for fuller descriptions of these memorable Chicago artists and the songs they played in this live performance show.The tracks and files are organized in exactly the same way as the previous version

Although far from a high fidelity recording, these audio tracks extracted from a mono videotape recording of the off-air broadcast, are nonetheless much clearer and distinct from the rather low quality cassette recording I had previously, even though that was taken from the stereo FM simulcast of the original broadcast. So, it provides a much better and clearer presentation of these remarkable one-of-a-kind performances. And now, in addition to the audio, you can actually see these performances, thanks to this B&W video that was recently unearthed by the folks at fuzzymemories.tv. This is just great stuff, even if the sound and picture quality leaves something to be desired. It is just amazing that this tape survived and exists at all (almost none of the other Made in Chicago shows were preserved in any form). So, if you did not previously check out these great, but relatively unknown artists the first time I featured them, here you have another chance. And if you already are of fan of them, well it is an even bigger treat. Although the overall quality of this recording is better than the one I had, I am still keeping the original recordings available also, because that was true stereo, and from the FM feed, even though the tape and quality had deteriorated over time, it still is of interest also. So, anyway, here they are again, Chicago's own Aliotta, Haynes, and Jeremiah, and Bill Quateman, with their original performances from Chicago TV in 1973, with performances and songs not heard anywhere else. A huge thanks to fuzzymemories.tv for finding this rare gem, and making it available to the masses.


Also, Here are the links to the video clips of the show now available at www.fuzzymemories.tv, which together comprise the entire broadcast (2 segments for each act). This is the order of the show (AHJ, then BQ, then AHJ again). Although the show was broadcast in color, the videotape this was recorded on was B&W 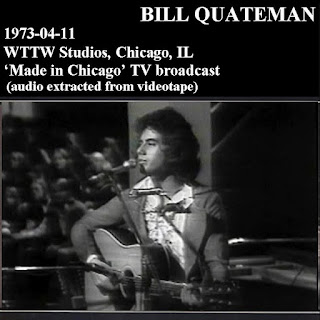