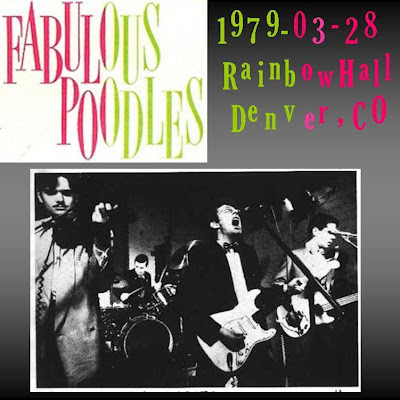 And now, for all you Fabulous Poodles fans out there, here's another rare treat. This is an exclusive concert recording, only available here, and comes to us thanks to a friend of the blog that sent this in to me. My new friend Rob Bishop was at this concert back in 1979, then rushed home to catch (and record) the delayed broadcast of the show on the radio. The resultant tape, as heard here, although missing the first couple songs (he must not have made it home in time to catch the beginning) of the show (for this tour they usually started with 'Suicide Bridge', then 'Chicago Boxcar'), provides us with another glimpse of the Fabulous Poodles Live. Once again, they are full of shenanigans and hi-jinks between songs, but put down some great Rock 'n Roll, prominently featuring Bobby Valentino on various instruments. Some new additions to this set include a sly re-working of 'Twist Again' as 'The Wrist', and more of their playfulness in their request segment where they ask the audience what was the first record they ever bought, and then attempt to play it. This time, it results in a hilarious country version of The Sex Pistols 'Anarchy in the UK' and a quick turn at Hendrix with 'Purple Haze'. The rest of the set features their usual mix of great songs from their first 2 albums. The recording, although suffering from limited dynamic frequency range (not much at the very low or high end, probably due to the equipment used at the time), is otherwise very good, with a nice clear sound and mix from the FM broadcast. Overall, a fantastic find and wonderful addition to the so few available recordings of this fine band. BTW, I know that Fabulous Poodles recordings are very scarce, because after the last one I posted (2/13/79 My Father's Place here), I was contacted by the former Road Manager for the Fab Poodles themselves (Barry Bartlett), and he was delighted to get that recording (he didn't have any). He also then contacted former Poodles band members Tony DeMeur and Bobby Valentino, who also did not have this recording (and they also were very happy to get it). If the band themselves don't even have live recordings from their days as the Fabulous Poodles, these recordings must be pretty rare. Anyway, enjoy this. Thanks again to Rob Bishop for recording this and making it available here. And Barry, Tony, and Bobby, if you're still out there, this one's for you - Thanks for all the entertainment you provided back in those days as the Fabulous Poodles! Truly classic stuff.

Whoeever you are... Great stuff! So glad i stumbled across your site!! Denver and NY concerts bring back great memories! Love hearing the 'request' tracks after all these years!
btw, link for the BBC recording doesn's work... would love to download that as well if you can fix it.