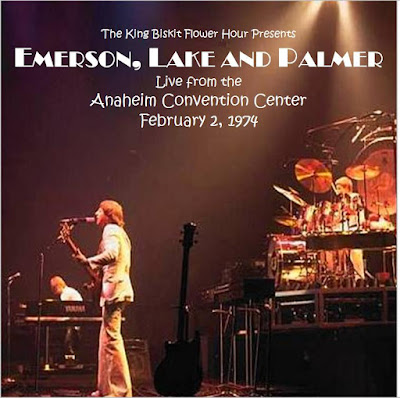 Continuing with ELP: Coinciding with the release of their 5th album, Brain Salad Surgery in November 1973, ELP set out on their biggest, most ambitious, and most outrageous shows and tour yet in support of the album, which included a massive stage set-up (including Keith's spinning piano and Carl's rotating drum platform, and a total of 40 tons of equipment). The album and tour were a phenomenal success, and resulted in the triple LP live album, Welcome Back My Friends to the Show That Never Ends...Ladies and Gentleman, Emerson, Lake, and Palmer, released in August 1974. And yet the tour continued on through October 1974. The shows were epic and featured songs from throughout their catalog, but the centerpiece was the full-length 'Karn Evil #9' from BSS. I saw them early on this tour (in Chicago, 12/73), and the show was truly memorable. This very good quality recording (unfortunately of just a fraction of the full show) comes from 2 separate King Biscuit Flower Hour broadcasts. The first broadcast, in 1974, edited the show down to about 50 min. for broadcast (eliminating several songs - indicated below), but included the full-length 'Karn Evil #9' (over 30 min.). In a later re-broadcast of the show in 1996, 'Karn Evil #9' was edited down to a 14 min. 'excerpt', and the 'Piano Improv' piece was removed, but, inexplicably, three songs from a much later unidentified show (probably from the 1977-78 Works Tour), were added, as well as a rather curious (butchered) edit of 'Tarkus' (excerpt) from the 1974 show was also added. Unfortunately, the entire re-broadcast show was still billed as being from Anaheim 1974, which has resulted in some setlists for the show incorrectly including the added 1977 songs as being played in 1974, which they definitely were not (No 'Tiger...', 'C'est La Vie', or 'Fanfare...' were ever played in '74, as they had not been written or recorded yet). So, anyway, I have combined the broadcasts into one show featuring the unique full-length songs from both shows. Since the 1996 re-broadcast recording was somewhat better quality, I have used this recording for the songs included in both shows, and the 1974 recording only for those that were edited or cut in the 1996 broadcast.  The result is a more complete, albeit unrepresentative, show (due to the newer 1977 songs included). But this is an ELP radio show in fine quality, so enjoy.

Note: Songs known to have been played at the 1974 concert, but not included in the broadcast included 'Jerusalem', 'Toccata', 'Tarkus' (full version - 27 min), and 'Take a Pebble', as well as some combination of 'Benny the Bouncer/Jeremy Bender/The Sheriff', and possibly an encore of 'Pictures at an Exhibition' (played at some but not all shows).

Thanks for the ELP

Thanks for this effort! This sounds better than Callow and Crash. However, I was hoping to reassemble the entire show, by supplementing WBMFTTSTNE with missing songs or those edited down for the LP. However, so far, it seems like the Album has all of the known songs (from that show) in their full length, unlike Callow and Crash, or either of the King Biscuit releases. With a King Biscuit tape of the entire concert (presumably) out there, I'm surprised that the entire show has not yet surfaced!