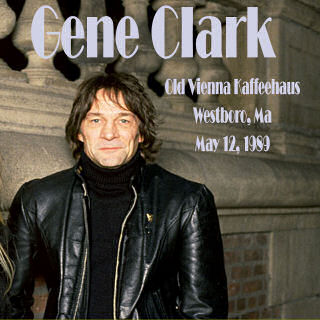 Gene continued doing some solo shows through Spring 1989, and then he did a series of duo shows once again with Carla Olson. There was even plans for the 2 of them to do another album together in 1989-90, but other than a couple of new songs, it never developed further. At this time, he was also caught in the middle of the ongoing struggle over the 'The Byrds' naming rights. Michael Clarke was on one side, as he tried to use the Byrds name for his band, and McGuinn, Hillman, and Crosby, were on the other side, opposing Clarke, and trying to keep the name for their own endeavors. Gene didn't take sides and tried to stay out of it, but ended up more or less alienating both groups. He also continued to have ongoing health problems, mainly due to his history of drinking and drug use. The battling Byrds were able to make peace enough to all join together for their induction into the Rock n Roll Hall of Fame in early 1991, where all 5 performed together as The Byrds one last time. But little did they know at the time that this was to be one Gene's last live performances, because on May 24, 1991, Gene was found dead of a heart attack at age 46. But his music lives on. This recording is from another performance at the Old Vienna Kaffeehaus in Westboro, just about 7 months after his previous appearance there (and the previous post). But although not much time had passed since that previous performance, he sounds much older and more tired here, with less clarity and richness in his voice. Nonetheless, it is still a fine performance, well worth hearing, and representative of these final years. But it is a bit sad to hear this and know that he would not be around much longer. So, just try to celebrate his great music. This is another fine David M recording, that was only recently made available to others, thanks to David M and the efforts of Rocking-Byrd.

Artwork Included
Thanks to David M. for the original files. Re-levelled, re-balanced, de-clicked, etc. and originally made available by Rocking--Byrd (rocking--byrd.blogspot.com)

The R'N'R Hall Of Fame ceremony wasn't the last time Gene performed live. He did a stint at the Cinegrill in Hollywood in April 1991. His performances from the 12, 13 & 14 april circulatte widely.

Thanks for the update R-B, I was not aware of those 1991 performances. Have you ever posted any of those shows on your blog?