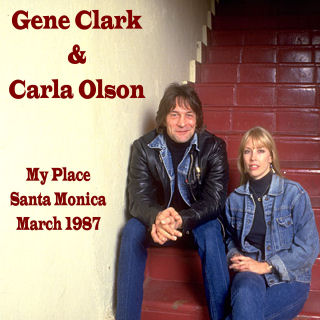 In fall 1986, in between tours with the various versions of his Byrds Tribute Band, Gene went into the studio to record some tracks with Carla Olson, vocalist for the Textones, and friends of Gene. These were all acoustic songs sung as a duo, and lead to the release of an album (So Rebellious A Lover) in 1987. The album consisted of 3 new Clark songs, 3 Olson songs, and some well-chosen covers. The album was generally well-received, but was much more laid-back then most of his recent bands were. Gene and Carla, along with a backing band of bass, drums, and piano toured to support the album in 1987, and this is a high quality recordingof their show in Santa Monica. Good stuff, and a nice change of pace from the Firebyrds and Byrds Tribute Band. I'm not sure of the origin of this recording, but it sounds very good, and was previously posted by rocking-byrd. So, here's yet another aspect to the wonderful songs of Gene Clark.

appreciate all your hard work to try and reup a lot of the past shares. Hope this one will appear sometime in the future also. Thanks again.

I guess I missed this one when I reposted the rest of the Gene Clark stuff. But here it is now, re-upped and available again. Thanks for the interest and support.

thanks again! I appreciate your efforts

Many many thanks from Amsterdam for uploading and thanks also for sharing. My grandfather will be very happy with this cause his still deeply in Gene.
Stay healthy and keep up the good word. best regards, dj