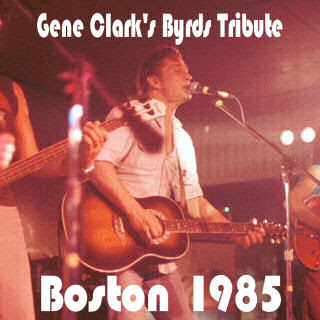 I've received a few requests for more Gene Clark. While I don't have anymore previously uncirculated stuff by Gene, I can post a few things that perhaps have not been very widely circulated. Here is a Boston show from Gene's controversial 1985 Byrds Tribute shows. In late 1984, after touring with his Firebyrds band, which included original Byrd Michael Clake, Gene was interested in trying to get the Byrds back together for a 20th Anniversary tour in 1985. Apparently, he contacted the other original mambers, but they were not interested, so he put together his own 'tribute' band, which in addition to Michael Clarke consisted of former Byrd John York, and an assortment of other famous 'B' band alums (The Band, Burrito Brothers, Beach Boys, etc.), including Rick Roberts, Rick Danko, Sneaky Pete Kleinow, and Blondie Chaplin. Once this group started touring as a '20th Anniversary Tribute to the Byrds', the remaining Byrds members were not at all happy about it, and accused Gene of misrepresenting the group as "The Byrds", and criticized him for not being able to make it on his own. The music and shows, however, were quite good, and there are a number of decent recordings of these shows. This Boston show, although only an OK recording, represents the full 'Byrds' portion of the show, and is a very good representation of the band and these shows (an earlier set was apparently performed by a make-shift version of the Flying Burrito Brothers, featuring most of the same performers from the Byrds tribute, but without Gene Clark or Rick Danko, performing burrito Brothers songs - this part of the show was not recorded). This is another fine David M recording, one that was previously posted by Rocking-byrd, so much thanks to them for making this available.

BB this is my show and the "Byrds" section is complete. I didn't include the "Bogus Burrito Bros" set, nor Pure Prairrie leagues'.For some reason the club had an early
closing time, so I'm guessing that's why it was such a short set. They were great, at any rate.

Hi David, thanks for checking in, haven't heard from you in a while. Thanks for the update regarding this recording. I have now updated the post with your corrections. Much thanks.

David and BBKron, thanks so much for making all of these Byrds family and friends shows available to all of us. Especially the ones with Gene Clark. Happy Birthday Gene, There's NO OTHER!

I hit send before I had a chance to add a very special thank you as well to Rockingbyrd for keeping the flame alive.