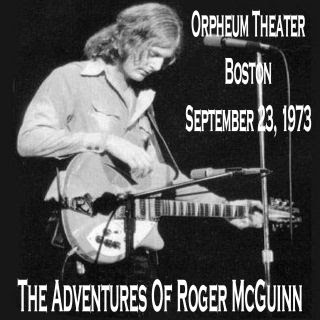 Here's some more Roger McGuinn, this one was recorded during Roger's first tour with a band after the Byrds disbanded (1973). This comes from just about 6 months before the 1974 solo Cambridge shows featured in the previous posts. So, it's very interesting to compare these full band versions with the solo versions from those shows. Although this show is much shorter, and the audio quality is not very good, I thought it was still worth posting as an example of Roger's band at that time. Thus, although not the best audio, there are very few recordings from this tour, and prior to Rocking-byrd making this David M. recording available through his blog earlier this year, this had never been circulated, so this has some historical significance. Anyway, here is some more Roger from the early '70's, from a somewhat rare show.

Concert recorded and files provided by David M. Many thanks to him.
Files re-joined, de-clicked, re-balanced, re-levelled by Rocking-Byrd, and previously made available through his private blog (rocking--byrd.blogspot.com).

Hi.
Any chance to re-upload this record?
Thank you.

What a start of a day.
Thank you very much.

Any chance for a new link on this one? Thanks in advance!

link now updated, plus, I have re-upped all the other Roger McGuinn links that had expired. Enjoy