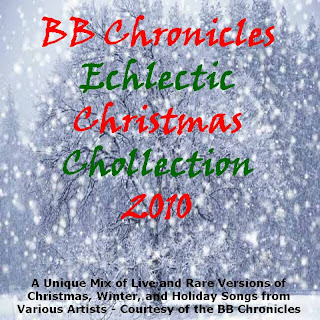 Here, once again, is my compilation of some lesser-known holiday songs that I put together last Christmas. Last year, however, by the time I got this put together and posted, it was so late in the season that many may have missed it, so I am highlighting it once again. Also, last year, I posted it in such a rush that I didn't get a chance to say much about it. So, this year I wanted to at least jot down a few notes about this compilation for anyone interested. I put this together from various versions and tracks I have compiled over the last several years. All of the versions here are live, otherwise unreleased, or available as free downloads, thus some of the versions are not the best quality (compared to the commercial releases). But, I think it is a fun and entertaining collection. I know there are many who are not that fond of Christmas songs in general, and modern versions of the same traditional songs in particular. But I happen to love the seasonal Christmas songs, and love to hear new and different versions of old classics, as well as original new Christmas-related songs. Thus, this collection features a mixture of old and new songs, heartfelt and jovial, serious and silly, but most probably by artists and versions you may not have heard before. Some of these tracks have been included in various other well-dispersed Christmas boots (Like Santa's Boots & Upon This Night), but there are several others that are unique to this compilation. I have purposely not included some of the more famous tracks & artists, but have gone with lesser-known versions and other stuff that I really like. Another thing I liked about putting this together is that it gave me chance to feature some of my favorite female vocalists that I have not had a chance to post here before.

I start  things off with a couple by the wonderful Aimee Mann (from a radio broadcast promoting her 2006 unconventional Christmas album, One More Drifter in the Snow, and as you might expect from her, it's not the most cheery Holiday album, but still very good), first a rather somber, but spirited 'God Rest Ye Merry Gentleman', followed by one of her own powerful originals, 'Calling Mary'. Next up is one I consider a Christmas Classic, but is not very well-known. It is the very beautiful, but melancholy 'Christmas Face' by Fisher. I first heard this over 10 years ago on the old mp3.com site, and it is just a gorgeous song. Fisher has survived their entire career solely on internet sales of their music, and they regularly offer their Christmas songs, including this one, for free download at their website. This is a seasonal favorite at my house. As good a start as those songs are, however, it was really time to lighten things up, so who better to bring some fun to the Holidays but The Barenaked Ladies, and their 'Jingle Bells' is a riot, perhaps the best version of this song ever (It starts all slow, overly serious, and pretentious, but then bursts into all out childish fun and glory, even including the perennial grade school variation verse [you know, 'Batman smells...' etc.]). Then things get even more ridiculous as Horatio Sanz and his SNL buddies take the stage with their ultra-cheesy, yet somehow cool, 'I Wish It was Christmas Today' taken from the original SNL broadcast (This may have been Horatio Sanz' finest moment on SNL). Then the 'Ladies are back with a clever and original ditty,'Elf's Lament' (from their excellent 2004 Barenaked for the Holidays album), a twisted take on a labor dispute at Santa's Workshop. Next, we return to somewhat more traditional holiday fair with Marti Jones' version of 'Rockin Around the Christmas Tree'. For those not familar with Marti, she was a wonderful female vocalist who had a string of fine albums in the '90's (Again, this is one of the best versions of this song I've heard). Then there is Bruce Cockburn with a gritty 'Early on one Christmas Morn', followed by Jackson Browne actually doing a cover of the little-known Timbuk3 satirical holiday protest song 'All I Want For Christmas is World Peace'. Next, is Steven Page (from BNL) in a fun duet with Rita MacNeil (Canadian TV hostess?) from her TV show. Next is another internet oldie, a song I discovered from the old mp3.com site over 10 years ago, a vocalist that went by the name C. Basinet doing 'Santa Baby' (I don't know anything about her, or what happened to her after this, but again, this is one of the best versions I have heard of this song). Then we have slightly different versions of some traditional songs done by Dave Alvin and Brian Setzer's Swing Orchestra, and a Greg Lake solo version of ELP's 'I Believe in Father Christmas', followed by a hilarious rebuttal by The Kinks, who have quite a different take on 'Father Christmas' (Unfortunately, the quality of this live version is sub-par, but it was the only decent unofficial recording of this classic I could find. If you have the original studio version, by all means substitute it in place here). Next is a short Christmas ditty from Yo La Tengo, a moving rendition of 'Please Come Home for Christmas' by Fiona Apple, and Rick Danko's 'Christmas Must Be Tonight'. Another underrated vocalist, Shawn Colvin, contributes a touching 'Merry Little Christmas', followed by a beautiful, stirring version of Joni Mitchell's classic 'River'. The Christmas portion of the collection comes to a rousing finish with Darlene Love's yearly revisit of 'Christmas (Please Come Home)' for the David Letterman Show (this was the 2006 version) of what has become a twenty-something-year TV holiday tradition. Then we move on to New Year's as Dave Edmunds rings it in with Chuck Berry's 'Run Rudolph Run' from an MTV NYE Bash (I think Edmunds studio version of this song is THE definitive version, even better than Chuck's own). Then Graham Parker gets serious and enlightens us about the 'New Year's Revolution', a great and compelling song. And finally, we close the whole thing out with a suitably austere and touching 'Auld Lang Syne' by Fisher. Anyway, so there it is, hope you like it. Let me know what you think of this compilation relative to other offbeat Christmas collections out there.

Some other Christmas-themed offerings still available here on the blog are:

I look forward to checking these out!

A wonderfully eclectic selection...which is what a good holiday mix ought to be! Thanks!