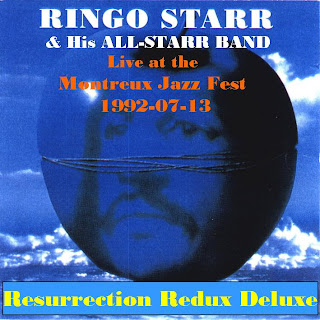 Last week's John Lennon post got me thinking about possible other Beatle-related offerings. Although I am a big Beatles fan, I have generally avoided posting any Beatles stuff because there is just so much already available at countless other places, that there just isn't much point posting it here. The same goes for anything by John, Paul, & George. Not so much for Ringo. Perhaps not surprisingly, there is much less demand, and thus much less Ringo stuff available. So, here is an excellent show from Ringo and his All-Starr Band from 1992, the 2nd incarnation of the ASB, and I think the best overall line-up, featuring such rock icons (and BB Chronicle favorites) as Burton Cummings, Dave Edmunds, Todd Rundgren, Nils Lofgren, and Joe Walsh, yet there have been very few recordings from this tour featuring this stellar lineup. The 1st All-Starr group (1989) also featured some top names (Levon Helm & Rick Danko from The Band, Dr. John, Billy Preston, Clarence Clemons, and Lofgren & Walsh) ) but I like the '92 group the best, and this was also the year that I saw the show, so it has special significance to me. BTW, I think that the All-Starr Band concept was a brilliant idea and marketing plan for Ringo. Combining Ringo with several other rock icons from the '70's and '80's, each of whom have a following, but also probably unable to draw big crowds on their own, was just a great idea. That way Ringo could perform some of his best-known songs, and each of the All-Starrs get a chance to lead and play a couple of their big hits, and everyone is happy. Essentially, they took Ringo, who for many would be considered a somewhat marginal concert act (Hey, I love Ringo, but can you really see paying big bucks to see a 1-1/2 to 2 hr concert consisting of only Ringo songs?), and made his tour into a must-see concert event. This concept has kept Ringo viable as a concert act for decades. Over the years, Ringo has toured with 11 different All-Starr Bands, right up to 2010. Granted, some of the more recent lineups haven't been quite as stellar (Mark Farner? Simon Kirke? Eric Carmen? Gary Wright?), although they still have featured some A-list icons, such as Gary Brooker (of Procol Harum), Greg Lake, and Roger Hodgson.
This show, from the Montreux Jazz Fest, comes primarily from an Italian boot (Resurrection), which had very good sound, but unfortunately only included 16 of the 25 songs played at the show. Through various other sources (including some of the same songs from different shows), I have cobbled together a reasonable reconstruction of the complete show (all 25 songs). When I saw this (very similar) show in '92, it was great. It was not only an opportunity to see Ringo live, but also Cummings, Edmunds, Rundgren, and Lofgren, some favorites of mine that I never got to see in their prime years. And here we get Cummings doing 'No Time' and 'American Woman', Edmunds doing 'Girls Talk' and 'I Hear You Knocking', along with Ringo's songs and goofy charm (although why Walsh does 'Desperado'-which is not even his song, and on piano yet, is very strange indeed). So here is Ringo & his All-Starr Band.

I would greatly appreciate if Ringo and His All-Starr Band could be re-posted. Thanks so much!

this is a great show. sorry for being so late to the show but it is very appreciated