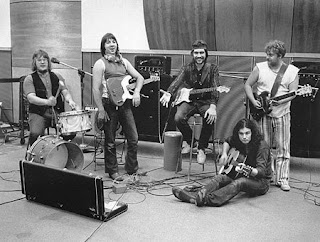 Here's a great set from The Guess Who in their prime, this one just a few months after Randy Bachman left the group, and features the dual guitars of new members Kurt Winter and Greg Leskiw, and of course the great voice of Burton Cummings. Also featured is an extended, scathing 'American Woman' and new songs from their just-released first post-Bachman album, Share the Land. As this tour (and their subsequent albums) indicated, not only would The Guess Who survive the loss of Bachman, but it actually made them a better band. Winter's guitar style and songwriting contributions were immediately felt on songs like 'Bus Rider', 'Hang On To Your Like', 'Hand Me Down World', and 'Coming Down off the Money Bag''. Again, not a very good recording, but a great show, and there are so few available Guess Who boots, it still is a great listen.

Oh man I about cried when I saw Hang On To Your Life~!

that is my Favorite song of theirs!
Never knew if It was done live....that spoken bit would be different for a show to do.

This was the first concert I ever attended. The Grass Roots were the opening act. One song I don't see on the list is "We're Coming to Dinner." I remember when Burton Cummings sang "even combed our hair," he licked his fingers and brushed them over the hair of his armpit... that got a big reaction from the audience. I don't remember where it was in the set, but I definitely remember it being there. I also remember the first song being "Bus Rider."

I can not get thses to play