Featured Artist - The Guess Who 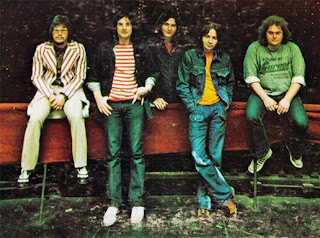 Ok, now I’d like to feature a really underrated ‘70’s rock band. This band featured a vocalist, who, as far as I’m concerned, was the best rock n roll vocalist of all time. They also were the greatest rock band to ever come from Canada. Can you guess who? That’s right; it is “The Guess Who”. Surprised? You shouldn’t be. From the late ‘60’s through the mid-seventies, these guys not only laid down an impressive streak of hit singles, but also put out some of the classic albums of that time. They were quite versatile, playing in a variety of different styles and grooves, from sweet pop to hard rock, with jazz, blues, swing, and folk influences thrown in. And they always put on a great live show. Unfortunately, there are very few shows available as bootlegs from their prime period, and no really high quality boots as far as I have heard. The best recorded live Guess Who show is, by far, the official release Live at the Paramount (1972), which on CD has been extended with several tracks not on the original LP. Well worth getting. I do have a couple of shows to share, but the recording quality is only mediocre. Still, they show that the live Guess Who is harder rocking than what might be expected by some of their hit singles.

Brief History
The beginning of the group goes back to the early sixties, when lead vocalist Chad Allan, along with guitarist Randy Bachman, drummer Garry Peterson, bassist Jim Kale and keyboard player Bob Ashley, played in and around Winnipeg, Manitoba under various band names, such as Al and the Silvertones, Chad Allan and The Reflections, and Chad Allan and the Expressions, achieving much local success but little widespread attention. However, in 1965, they recorded ‘Shakin All Over’, and as a publicity stunt, their producer released the single with a blank label that just said “Guess Who?”, in the hopes that people would think it was someone famous and attract more attention. As radio stations began playing the song, they referred to the artist as “Guess Who?”, and the song became a hit, reaching #1 in Canada, and eventually even charting in the U.S. But now with that hit to build on, their record company asked them to change the name of the band to “The Guess Who”. The band reluctantly agreed, but this was never their idea or choice as a band name. They toured extensively and recorded a new album, but by the end of 1965, keyboardist Bob Ashley left the group. He was replaced by a brash teenager with a strong voice, Burton Cummings, who was beginning to make a name for himself with his high school band, The Deverons. Tired of touring and not happy with the harder edge the group was pursuing, Chad Allan decided to leave shortly thereafter, giving the lead vocalist reins to Burton. However, unable to repeat the success of ‘Shakin All Over’, the band had some lean times over the next couple years, and eventually took a gig as the house band for a CBC TV music show “Let’s Go” for a year. Finally, in 1968, after a few more unsuccessful singles, they recorded the album Wheatfield Soul, and released ‘These Eyes’, which soared into the top ten 10 in both Canada and the U.S., and officially launched The Guess Who to the rest of the world. Follow up singles ‘Laughing’ and ‘Undun’ solidified their standing as hitmakers, and in 1970, as they moved toward an edgier hard-rock sound with ‘No Time’ and ‘American Woman’ (from the album of the same name), they established themselves as a legitimate rock band (‘American Woman’ was a U.S. #1 single and an instant classic). Randy Bachman, however, was tiring of the group's lifestyle and left the group shortly to form “Brave Belt” (reuniting with his old friend Chad Allan), and eventually, "Bachman-Turner Overdrive". The Guess Who replaced Bachman with Greg Leskiw and the irrepressible Kurt Winter, and their combined talents brought the group further success with 'Share the Land', 'Hand Me Down World', 'Rain Dance' and 'Albert Flasher'. Nonetheless, there were more personnel changes in 1972 (Leskiw and Kale departed to be replaced by Don McDougall and Bill Wallace) and 1974 (McDougall and Winter left, and Domenic Troiano came in as the sole guitarist. Although these extensive line-up shuffles did undermine the group's progress, they still put out quality records until 1975, when Burton decided to call it quits and pursue (a very successful) solo career. Jim Kale tried to get the band back together in 1977, but neither Cummings nor Bachman were interested, as they had their own successful careers. So, Kale re-formed the rest of the band (Peterson, Winter, and McDougall), toured, and recorded a couple of albums without much success. However, Kale registered the name “The Guess Who”, has control over it, and has continued to tour and perform in some form of the band ever since. In 1983, Cummings and Bachman did reunite with the band for a tour and live album, but then returned to their solo work. They also got back together in 1999 and toured through 2001, again releasing a live album. Once again, in 2003, the full band reunited for a charity benefit. Bachman and Cummings formed their own band in 2005 (just called Bachman-Cummings), and continue to perform and tour, and have released a couple albums.

The Music
The early singles ('These Eyes', 'Laughing', and 'Undun') established the group as radio mainstays, but it was the album American Woman (1970) that established their rock credentials as a force to be reckoned with. Lead by the melodic rock of ‘No Time’ and the surly toughness and defiance of ‘American Woman’, American Woman (both single and album) soared up the charts and became an anthem during those politically-charged times of the early seventies. Another stand-out track on the album was the fusion of two separate songs to become a tour-de-force arrangement as ‘No Sugar Tonight/New Mother Nature’ (probably my favorite track of theirs). Despite this success in 1970, there was turmoil within the group and Bachman left (or was asked to leave). Contrary to popular belief, however, the group did not peak with Bachman, then decline when he left. Although American Woman (last album with Bachman) was the groups biggest hit (both single and album), their music got even better with their next few albums (most notably Share The Land and Rockin’), and was highlighted by a very strong songwriting collaboration and personal bond between Cummings and Winter (as well as Winter’s versatile and dynamic guitar work) that added new dimensions to the groups sound and repertoire. Share the Land (1970) featured an environmental message and was probably their overall strongest album, boasting songs such as ‘Bus Rider’, ‘Hand Me Down World’, ‘Do You Miss Me Darlin?’, ‘Hang on to Your Life’, and the title track. On their next couple albums (So Long Bannatyne and Rockin’), they lightened up a bit from the seriousness of American Woman and Share the Land and seemed to have a lot more fun, including a few throwaway just-for-fun ditties (oddities?), and also experimenting with different styles and types of songs. The results were superb, making rich, enjoyable, though not as radio-friendly albums. So Long Bannatyne (1971) includes some favorites, ‘Rain Dance’ ‘Pain Train’, and ‘Sour Suite’, and Rockin’ (1972), for me, was the best of all their albums, filled with quirky delights and styles, from the rockers ‘Heartbroken Bopper’, ‘Guns Guns Guns’, ‘Smoke Big Factory’ to the more offbeat but delightful ‘Get Your Ribbons On’, ‘Back to the City’, ‘Arreviderci Girl’, ‘Nashville Sneakers’, and their send-up of fifties songs ‘Don’t You Want Me’ and ‘Heaven Only Moved Once Yesterday’ included in the hilarious ‘Hi Rockers’ bit. What a great album. However, Rockin’ produced no big hits, and the group’s popularity was beginning to slide in the U.S. The next few albums continued to be strong (#10, Artificial Paradise, and Road Food, 1973-74), containing several notable songs, including ‘Glamour Boy’, ‘Orly’, ‘Follow Your Daughter Home’, and ‘Star Baby’), but were not as consistently excellent, and generally did not produce any hit singles (at least in the U.S., they remained superstars in Canada), except for the novelty song ‘Clap for the Wolfman’ in 1974, which was TGW’s last U.S. hit single). When guitarists Winter and McDougall left the group in 1974 (after Road Food), they were replaced with Domenic Troiano, and the group moved toward a jazzier pop sound and feel for their last two albums (Flavours and Power in the Music), which were decidedly different from previous albums, but still had their moments (such as ‘Hoe Down Time’ and ‘When The Band was Singin’ Shakin All Over’).
There are many different compilation albums available for the Guess Who, but don’t be fooled by any of the single CD collections. There are just too many great songs to be adequately represented by a single disc collection. I highly recommend the 2-CD Collection titled “Anthology” It contains all the hits and many other additional and noteworthy tracks not available on the other collections. This is a great place to start for anyone wishing to get a good overview of the great music out by The Guess Who over the years. However, even this collection leaves of several stand-out cuts from throughout their career (most notably from Rockin’, which I believe is their best album). Thus, with the purchase of Anthology, and perhaps 1 or 2 other individual albums (Most Highly Recommended: Rockin’, Live at the Paramount, and Share the Land), you can have a great representation of the best of the Guess Who.
Posted by BBKron at 3:44 PM

great blog! My fav guess who songs are Glamour boy and runnin back to saskatoon.

send me an email if you like
thanks for your time
Chris
yesbookends@cox.net