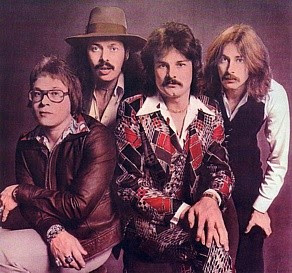 OK, here's a great sounding radio show from 1975 (best sounding Guess Who boot I've heard). Unfortunately, it is from the end of the group's career, after guitarists Winter and McDougall left, and featuring new guitarist Domenic Troiano, promoting the band's next to last album, Flavours. Here, as they are trying to establish the new form of the band, they (purposely, I think) do not play any of the classic GW songs, focusing almost entirely on newer material and their newer (albeit short-lived) sound and style. Mind you, it is still very good. Still well-worth having and listening to, but just not classic GW. Highlights are the best track from Flavours, 'Hoe Down Time', as well as the 'newer classics' 'Sour Suite' and 'Orly', and an angry extended jam on 'Long Gone'. As Willard (formerly of Willards Wormholes blog) said 'It's Burton at his surly best and the song's progression recalls the band's early experimentation with form, highlighting extended, improvised sections and some killer grooves. It also displays an interplay between Burton Cummings and Domenic Troiano that could have been intriguing if pursued further, but wouldn't make it past two albums before The Guess Who split for Burton to go solo.

can anyone find guess who 1975 cobo hall detroit? thanks

this link is dead

I've updated the link, and since I now have this in FLAC, I've included a new link for the upgrade to the Lossless version. Enjoy!