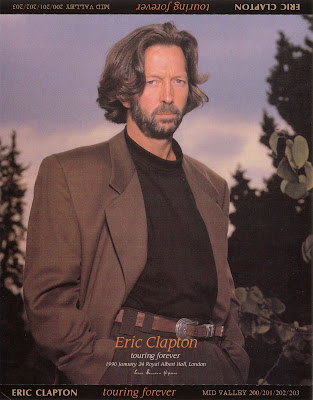 By request, here's a great show and recording from the Journeyman Tour, and one of the unique series of shows performed at the RAH for the '24 Nights' project in 1990 and 1991. Different nights featured different band configurations and sets. This show features the 4-piece 'rock' band. There also was a 9-piece band, a 13-piece band, the 'Blues Band', and a full Orchestra. Several other high quality (both official and unofficial) recordings from these shows are also available.  Excellent soundboard boots are also readily available (check T.U.B.E.) for the 2/3/90 Blues show ('Blues Night') featuring Buddy Guy and Robert Cray, the 2/10/90 full Orchestra show ('Orchestra Night'), the 2/17/91 9-piece show ('Blues Night'-Star), and the 2/25/91 Blues Band Show ('Play With Fire').
This upgraded and expanded version includes songs that were not included in the previous ('London at Night') version of this show. I have also included (as bonus tracks) 2 songs that were played but not included in the broadcast recording. These recordings all come from the Mid-Valley bootleg release, Touring Forever.

CD2
01. No Alibis
02. Tearing Us Apart
03. Wonderful Tonight
04. Band Introduction
05. Cocaine
06. A Remark You Made
07. Layla
08. Knocking On Heaven's Door
09. Crossroads
10. Sunshine Of Your Love
Bonus Tracks (From Same Concert but not included in BBC broadcast, from video source)
11. Breaking Point (played after Running On Faith)
12. Can't Find My Way Back Home (played after White Room)

I apologize for my time in getting back to you. Well you know how it is. Like I said I am able to furnish you with one of your albums from your wishlist.

I have one more which I will post for you very soon ok my friend. I will let you post this yourself as I don't actaully have Part 1 at this time. Two parts and 320kbps.

My pleasure and hope this is what you needed.

Thanks for your patiencer and also your kind words and visits to my blog also.

Thank you very much for Eric Clapton's LOndon 1990 show, my friend.

Wow, Thanks so Much, Chuntao for Kind of Blues. I have already posted it, and it is great!. Thanks!

Good that you have it now. Excellent, I wasn't sure as it did say Jimmy Vaughn on it and the quality is great also. I will now delete my links as i have had 7 downloads between the two discs already.

My pleasure and thank you for your encouragemnet my friend :)

Enjoying the EC re-up---thanks for the post and happy anniversary!