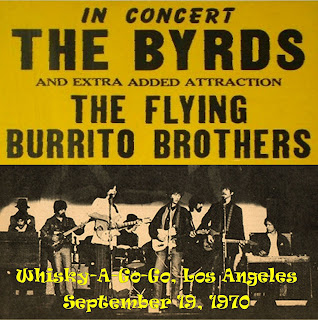 Here is a rare gem of a recording that superbly documents a unique live event, the merging of the Byrds and Flying Burrito Brothers into a one big jam session at the Whisky A Go Go in fall 1970, and with very good sound quality, too.  This is another recording I recently obtained from Rocking-Byrd (Much Thanks!), and apparently it has only recently surfaced. It is such a delight I just had to share it here, too. This is a great pairing, and features what is arguably the best lineups from each band regarding their live shows (with Byrds featuring McGuinn and Clarence White and FBB featuring Hillman, Bernie Leadon, and newcomer Rick Roberts). I've already talked somewhat about the entwined histories of these bands, and the various lineups over the years, so I'll just put in here an excerpt from the review that came along with this recording that more fully explains this event (Full extended review included with download).
"...In 1970, Just three days after the release of Untitled, The Byrds new double album (featuring both live and studio recordings), both The Byrds and The Flying Burrito Brothers were booked for a series of six shows over three nights at the Whisky A Go-Go in their home town of Los Angeles. This run would also be Rick Roberts' debut with The Burritos, who were still yet to recognize the extent of his talent. The Whisky only held several hundred people and The Byrds hadn't performed there since October of 1968, so tickets were a hot commodity. Surrounded by family and friends (in addition to having a common fanbase), this run guaranteed a three-night party, playing to packed houses for every show.
Logistically, these shows were challenging as The Byrds' P.A. system was designed for much larger venues and because, between the two groups, there was a lot of equipment. Strict time constraints required the downtime to be minimal, so all equipment from both bands (including two drum kits) needed to be squeezed onto the tiny Whisky A Go-Go stage. To accommodate the Byrds' P.A., cabinets were wired to multiple locations around the room. Each 90-minute show was structured with the FBBs performing a 45-minute opening set, immediately followed by a 45-minute set by The Byrds. This basic format continued throughout the run until the final night, when the two groups hatched a plan for the late show. For this final show of the run, the FBBs would begin their set as usual, but after several songs, they invited The Byrds out for an informal jam session. The rest of the night would feature both bands performing together for the very first time." [Ed. Note: Actually, not the first time, as both bands, with somewhat different lineups, also performed together a year and a half earlier, on 2/23/69, their final night together in a series of Boston Tea Party shows. Unfortunately, a recording from this previous event, although rumored to exist, has never become available.]
"Until now, this event has been relegated to the stuff of legend, but presented here are the complete recordings of that very set, recorded by Byrds' sound engineer Dinky Dawson. Despite the challenging circumstances of such a tiny room, Dawson's soundboard cassette masters manage to capture a great deal, with all of the instruments and vocals audible. The balance is not perfect, but in this instance, the good far outweighs the bad. Surprisingly, the recording is also in stereo, with McGuinn and Hillman's vocals panned to opposite channels, allowing listeners to clearly enjoy each individually, as they sing together for the first time in years. The setlist is a Byrds-lover's dream, containing material from both Sweethearts Of The Rodeo and The Notorious Byrd Brothers albums, in addition to classic early material. Despite the unrehearsed and somewhat intoxicated nature of these performances, it is obvious these musicians are having an awful lot of fun together. Seemingly eager to dig in to every song, downtime is kept to a minimum, as The FBBs and The Byrds collaborate on stage for the first [make that second] time ever." (Alan Bershaw - text obtained from Rocking-Byrd's site).

If memory serves (and these days it does not always) the 1969 Byrds/Burritos collaboration was featured in a Rolling Stone review/article. It would be amazing if that surfaced.

Thanks for a ton of great recordings the past year (and before).

Can't wait to hear this! Thanks!

Hi,
I'm a record collector from Italy and a die-hard fan of the late 60's/early 70's country-rock California scene.
I used to attend Rocking Byrd blog site for "inspiration" (it reads "downloading"), but it seems to be long time closed. Now I read that you got the Byrds/FBB jam at Whiskey A Go-Go from this site: is it open still? Could you possibly get me an invitation? Please answer at:

Thanks a lot!
Dino Della Casa

great show, but the wrong era photo. this picture is from the 1969 boston Tea party jam, with a different Byrd and burrito lineup.

Thank you, never even knew this show took place, much that there was a recording.

Kikkuz: you are still a subscriber to Rocking--Byrd...but with another e-mail address.

David: if you have a picture of the Whisky Byrds/FBBs performance, I'd be happy to use it for artwork.

Kikkuz; the blog has never been closed. It was dormant for some time.

Great post! I was wondering, has the Byrd and Burrito 1969 Boston Tea party jam ever surfaced and circulated?

Really enjoying this recording. Thanks so much. Is it still possible to access the Rocking-Byrd site then???

Thanks for the nifty post. Since I came across it during a search for an obscure FBB song, I'd like to pose a question to the blogger or anyone else in the comments who might be able to help. The good news is that I have a track on an old mix CD that is a live recording of the band playing "Colorado" in the key of G Major. Being the perfect-pitch nerd that I am, the key is the reason why I like the song so much. By contrast, the original studio recording is in B Major. Anyway, I'd like to find out more about this apparently rare live version. The only bit of information that came with the MP3 at the time was a mention of a "Gram Parsons tribute", which doesn't help. Does anyone know anything about "Colorado" in G Major, live? Thanks very much for reading!

Never mind, I found it!! It was from "Close Encounters to the West Coast", I found it on Amazon. Thanks anyway!

Any comments on the pros and cons of being a "perfect pitch nerd"? A fellow music fan friend of mine says he has "near" perfect pitch and sometimes on rock recordings it can really bug him with the "notes" that the singers sing. At the same time, I can tell he can get a lot more in-depth stuff out of a recording than I can.

Thank YOU for reposting. Awesome Blog !

Hi ! Rb, I am very disappointed that i cannot access your blog as it is the best
and most comprehensive archive for any Byrds fan.I have always tried to leave supporting comments and opened a Gmail account to keep in touch but it won't let me on! Can you help as your blog is really important and interesting to me. Best wishes Kevin.

Zippyshare is alive but the link is dead. Any chance of a reupload? Please.