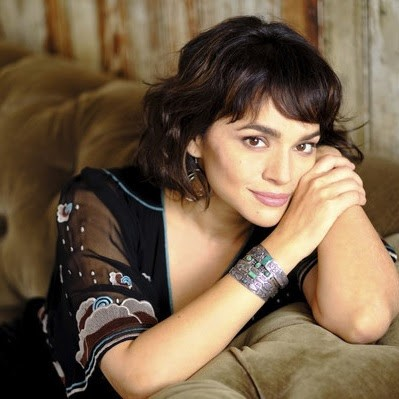 To wrap up this current string of posts featuring great female vocalists, here is (one that it is quite surprising that I have not posted anything by previously, because she is fantastic), singer-songwriter-musician Norah Jones. Norah has that great voice and soothing, sultry style that is just so wonderful to listen to. Norah Jones (full birth name: Geethali Norah Jones Shankar) is the daughter of American concert producer Sue Jones and Indian musician (and famed sitarist) Ravi Shankar, was born in New York, but raised primarily by her mother in Texas. She began singing and playing the piano at an early age, and gravitated towards the music of jazz pianist Bill Evans and singer Billy Holiday. After college (University of North Texas, majored in Jazz piano), she headed to New York and performed with various jazz bands (1999-2001). She signed with Blue Note Records as a solo act and her first album, Come Away With Me (2002), featuring an intriguing mix of acoustic pop, jazz, soul, blues, and country, was a huge success. The album went to No.1, as did the first single 'Don't Know Why', and the album won 8 Grammy awards in 2003 (Jones herself winning 5), including Album of the Year, Best Pop Vocal Album, Best Female Pop Vocal Performance, and Best New Artist, and has gone on to sell over 27 million copies over the years - a phenomenal debut. Her follow-up, Feels Like Home (2004), was also very successful, going to No.1 and multi-platinum. For her next album, Not Too Late (2007), Jones wrote or co-wrote all the songs, with an overall darker tone, showing her growth, but still retaining the familiar qualities people enjoyed. With subsequent albums, Jones would go in more different styles and directions, as well as having numerous different collaborations and side projects showing different sides of her music (including her alt-country band, Little Willies, country female trio Puss n Boots, and collaborations with Foo Fighters, Ryan Adams, Willie Nelson, Dirt Dozen Brass band, Ray Charles, Dolly Parton, Cyndi Lauper, and even Seth MacFarlane, among many others). But for this first post, we go back to those earlier days. This is a show from 2004, around the time of the release of Feels Like Home. It is an excellent, pristine FM broadcast recording of Norah with her band at that time, which included guitarist Robbie McIntosh (The Pretenders, Roger Daltrey, Paul McCartney, Jerry Harrison). A great introduction to her songs and style at that time.

Lovely BB how about sharing later gigs now!? [Sorry bit of a dig!] ;)
Great quality and have shared links across to your posting