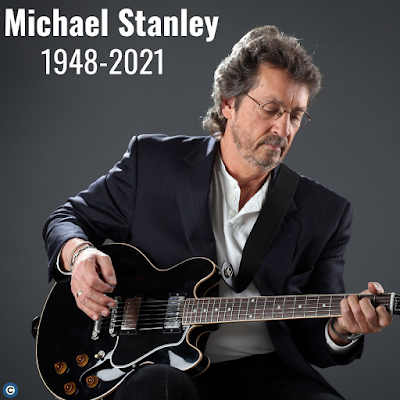 Here's more from legendary Cleveland rocker Michael Stanley and his Michael Stanley Band (MSB). By 1980, MSB had developed a huge following around Cleveland and the Midwest, but after releasing five solid albums in 5 years, had not scored much national success or notoriety. And that lack of breakthrough success resulted in being dropped from two record labels and had lead to turnover within the band, as Gary Markasky took over on lead guitar, Michael Gismondi was now in bass, and Kevin Raleigh was brought in on keyboards, vocals, and as an additional songwriter to Stanley. Stanley and drummer Tommy Dobreck were the only members left from the original lineup. But in 1980 the band released perhaps their strongest album, Heartland, which included their highest charting single, Kevin Raleigh's ' He Can't Love You'. They followed this with another strong album, North Coast (1981). But the next album, MSB (1982) struggled to maintain momentum, and that breakthrough success still eluded them. Meanwhile, in the Cleveland area, they sold out every show and set concert attendance records. Their last album on EMI America, Can't Fight Fashion (1983) included another 'almost hit' that became a standard for Stanley and Cleveland, 'My Town'. The band released a couple more albums on their own label, a Live album, Fourth and Ten...(1984), and Inside Moves (1986) before calling it quits. After that Stanley hosted a Cleveland TV show for a few years before settling in as a radio personality, manning the drive-time slot at Cleveland's classic rock radio station WNCX for more than 30 years. Stanley also kept his music chops active, playing occasional shows, and also releasing a series of solo albums (16) on independent labels throughout his radio years. Although never quite becoming a nationally recognized rock star, he was beloved throughout Cleveland and the Midwest, and many thousands of people still have very fond memories of the heyday of the Michael Stanley Band. Here is a fine radio broadcast show of MSB from his hometown Cleveland in 1980, right around the time of the release of Heartland.

I appreciate the share of MSB music. Also, I do enjoy your commentary on each of the artists and their shows. It is always informative and a good read, even if I don't download.

Thanks for your time in keeping this site up

Jim,
Thanks for the comment. It's nice to hear that some people actually read the descriptions and commentary on these posts, and get something out of it, as that is usually the most time-consuming aspect of putting these together. Hopefully, it gives some background, whether or not that artist's music is something you are in to. Thanks.