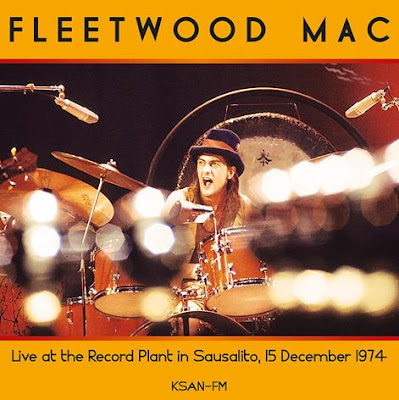 Continuing on with more from 'The Bob Welch Years' of Fleetwood Mac (1971-1974). After dismissing guitarist-songwriter-vocalist Danny Kirwan (for out of control alcohol problems) after the Bare Trees tour, in September 1972, the band added guitarist Bob Weston and vocalist Danny Walker (Savoy Brown), as they apparently wanted to maintain a similar dynamic of having 2 lead guitarists and 3 vocalists. This new lineup recorded Penguin (1973), which was well-received, but Walker was let go shortly after that for not being the 'right fit' for the band. The remaining members carried on, releasing their next album, Mystery To Me (1973) just 6 months later. Mystery to Me is a strong album, and featured 4 Christine McVie songs (for the first time), as well as several good Welch songs, including 'Hypnotized' which received substantial radio play in the US and became a band standard. The band seemed poised for greater success, but additional problems intervened. Early on in their subsequent tour, guitarist Weston had an affair with Fleetwood's wife, which caused Weston's immediate dismissal, and the emotionally devastated Fleetwood was unable to continue the tour, resulting in its cancellation with 26 dates left to play, causing the band to 'temporarily disband'.  Well, the band's manager was not about to let that happen, and told the band that he owned the rights to the name 'Fleetwood Mac' and would hire a new set of musicians to tour in early 1974. He hired members of the band Legs, who were told that Mick Fleetwood would rejoin the band with them later on the tour (even though Fleetwood had nothing to do with them). They were billed as the 'New Fleetwood Mac', and performed at rescheduled dates on the US Tour. Although the tour started out OK, as word spread that this was a 'bogus' Fleetwood Mac, they faced increasing hostility and cancelled shows, forcing the cancellation of the rest of the tour. Meanwhile, the resulting lawsuit regarding the Fleetwood Mac naming rights sidelined the 'actual' Fleetwood Mac for most of 1974. Although the battle was not legally resolved until 4 years later, the 'real' Fleetwood Mac, which was now a foursome consisting of Welch, Fleetwood, and John and Christy McVie, was able to continue recording and tour again beginning in September 1974. Another change brought about by the lawsuit was a move of the band's base of operation to the US, which afforded greater cooperation with their record company and access to the US market. This stripped down version of the band (this was the first time Fleetwood Mac did not have 2 or more guitarists) released a dynamite new album, Heroes Are Hard to Find (1974) and played several dates in the fall of 1974. Heroes consisted completely of Welch (7 songs) and C. McVie (4 songs) compositions, and was arguably their best album to date, with McVie's title track and 'Come a Little Bit Closer', and Welch's 'Angel', 'Bermuda Triangle', and 'Silver Heels' among the highlights, and the album charted higher in the US than any previous album (reaching #34 Billboard). Personally, I really liked the sound and style of this period and album. Welch's unique combination of rock, jazz, funk, and pop, and his moody, atmospheric groove and vocals brought a different sound and style to the band, and this period also saw the development of Christine McVie into a world-class songwriter and performer. But, Welch left the band in December 1974, going on to a solo career. And then, of course, shortly after that Lindsay Buckingham and Stevie Nicks (of the struggling duo Buckingham-Nicks) joined the band, and Fleetwood Mac soared to unprecedented heights with their subsequent releases Fleetwood Mac (1975),  Rumours (1977), and beyond. But these Bob Welch years were an important and crucial phase of the band, providing many memorable songs and shows, and I really don't think that the subsequent megastardom phase would have been possible without the development of the band during Welch's time and leadership. However, when Fleetwood Mac was inducted into the Rock and Roll Hall of Fame in 1998, Welch was not included, even though all other past members of significance, such as Peter Green, Jeremy Spencer, and Danny Kirwan were all included. And most of the Fleetwood Mac compilations completely ignore this period (only the 3-disc box set 50 years-Don't Stop includes any Welch or McVie songs from this period). Bob Welch died in 2012 at age 66. A few months before his death, he underwent spinal surgery which did not go well, leaving him in pain and unable to walk. On June 7, he took his own life.

The show posted here returns to Welch's final days with Fleetwood Mac, possibly his last show with them. it is an excellent radio broadcast from the Record Plant, December 15, 1974. The show is live, but without an actual audience, being in front of only a couple dozen Record Plant-affiliated people, which makes for a somewhat strange silence after and between songs. But it is a great show nonetheless and Welch's final fling with Fleetwood Mac. Unfortunately, they did not play 'Silver Heels' or 'Heroes', 2 of my favorite songs from Heroes Are Hard to Find.

mp3 - Fleetwood Mac_1974-12-15_Sausalito_mp3.rar
Note: the FLAC and mp3 versions here come from slightly different source recordings (but both excellent). The mp3 version has the false start to Sentimental Lady removed thus the track numbering is a bit different.

Thanks for this, I got to admit I never really listened to this mid-period of their evolution before, and there's some surprisingly good songs.

I have a live recording from 10/8/74 at Ultrasonic Studios in Hempstead NY that has a very similar setlist. I'm curious about the final song both the Sausalito recording and the Hempstead recording - "Mystery to Me." That's clearly the name of a really good Fleetwood Mac album but that album doesn't have a song named "Mystery to Me." The song on my recording sounds like a traditional slow blues with vocals slipping in about halfway through but I've never seen a Fleetwood Mac performance of a song with this title anywhere else. Anyone know anything about it?

I don't really think this is a formal song at all. This seems to me to be, as you said, a slow blues jam that they just slipped in at the end of a couple shows around this time. I believe the 'lyrics' were just adlibbed by Welch as they went (sticking in references from their songs, such as going down to the well, angel, mystery to me, etc.), but I don't think was ever meant to be an actual song, just a bit of improvising by the band. It is interesting though, that they played it at the end of both the Ultrasonic and Record Plant shows, very similar each time. So , maybe it was something they were working on, but had not developed further. As far as I know, it is not a part of any of their recorded songs.

There is a Image floating around of the wrap up of The Rumors album with Bob with everybody involved there. It was a bad call on HOF not to include him but the HOF is notorious for bad calls. As the picks have shown over the years. Thankx for the the narration of something that should be made well known. I also remember that some of the other members of FM joined in on Bobs solo effort French Kiss. Keep up the great work ie pleasure you do here.