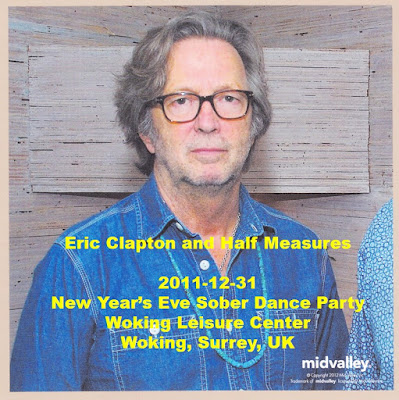 Happy New Year (and hope for a better one) for All! For this year's New Year's Eve show, we go back to Eric Clapton's string of 'Sober Dance Party' NYE shows in Woking UK. The New Year's Eve Sober Dance was an alcohol-free party and was hosted by Eric Clapton and Friends almost every year from 1992 to 2012. It was a private event and tickets were not put on sale to the general public. Each year, the band billed themselves under an unusual name. This year I am presenting the penultimate show, from 2011, where the band was billed as 'Half Measures' and consisted of Eric's usual band at that time, plus the addition of Gary Brooker (Procol Harum), who frequently joined in for Eric's regular NYE shows. The show features an emphasis on the blues and early RnR and is a wonderful presentation of Eric's band at this time. The 2012 NYE was the last of these events, however, but I have not been able to find any recording of that show, so here is the penultimate sober NYE show from Eric in 2011.

That's Gary Brooker, with an 'r', not Booker. He's the longtime singer/pianist/frontman for Procol Harum.

Thanks a lot BB and a most welcome addition despite Eric's recent collapse into Van Morrison's anti-vaxer anti-Covid conspiracy theory madness, we still gots to love a Clapton gig and look at that line up! Most of the old Grease Band plus Eric long-standing stalwart Andy Fairweather-Low and Gary from Procul Harum. Top stuff! Thank you and may I take this opportunity to wish you all the best and stay safe and well throughout the coming New Year. Thanks for ALL you make available to us

Of Course, I know precisely who Gary Brooker is, and I correctly identified him in the text of the post. The misspelling in the band lineup was not by me, but in the info file that came with the files I received. I just failed to notice that they had misspelled Gary's name before posting this. Fixed now. Thanks.

Hello,
A good way to wish Happy New Year. Many thanks for sharing!
Best regards,
drogos