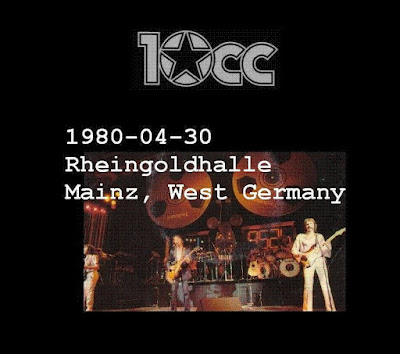 OK, here's one more 10cc show. After the successful 1977 Deceptive Bends tour and release of the live album Live and Let Live, the group returned to the studio with the same band musicians as the tour, except that keyboardist Duncan MacKay replaced Tony O'Malley. The result was Bloody Tourists (1978), which produced another hit in the reggae-styled "Dreadlock Holiday" and also did well on the charts. But that success was short-lived, as in January 1979, the band suffered a major setback, in that Eric Stewart wear was involved in a serious car accident, damaging his ear and head, rendering him unable to go anywhere near music for more than 6 months. By the time the band was able to get back to working on their next album, their musical momentum had stalled, changes in the music business and musical tastes (punk and new wave had taken over rock) had reduced their popularity, and they would never again the level of their previous successes. The album, Look Hear? (1980), failed to produce any hits and stalled on the charts, and although solid, was the beginning of the end for the band. Stewart and Gouldman jettisoned the rest of the band (using session musicians) for the next album, Ten Out of Ten (1981), and also tried adding songs from guest Andrew Gold for the US version of the album, but it failed to attract much attention. Their next album, Window in the Jungle (1983), also was not successful, and the 1983 tour was the last from the band before going dormant and pursuing solo projects for the next several years. As mentioned in an earlier post, 10cc did get back together in 1991 for a new album (with limited involvement from Godley and Creme) and continuation through 1995, as well as subsequent touring bands fronted by Gouldman also billed as 10cc. Anyway, this 1980 tour was the last while the band was still flying relatively high. This is a very good recording from an FM broadcast. Although the setlist does feature many (6) lesser-known songs from the current Look Hear? album, it also features a nice selection of hits from previous albums as well, and it is a very fun show.