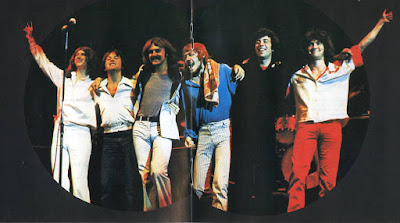 Here's more 10cc. As mentioned in the last post, Kevin Godley and Lol Creme left the band shortly after recording the album How Dare You? (1976), which is considered by many as their best album. But the growing distance between the two sets of songwriters (Stewart and Gouldman vs. Godley and Creme) regarding the music and vision for the band had become too much. Godley and Creme, always on the more experimental and avant-garde side, left to work on their own project, which became the  3-album concept opus Consequences (1977). Stewart and Gouldman, with the more pop song sensibilities, continued on as 10cc. But now without Godley and Creme, they were determined to show the world that the band could continue just as strong as previously (some critics had already dubbed the new version of the band 5cc). So, Stewart and Gouldman put everything they had into their next album, even playing all the instruments (except for Paul Burgess on drums). The new album, Deceptive Bends (1977) would be their most successful yet, with the hits "The Things We Do Love" "Good Morning Judge", and "People in Love", and much critical acclaim. Personally, this is my favorite 10cc album. But although they could record the album as a trio, additional musicians were needed to perform the songs live. So, for their Deceptive Bends tour, a "touring band" adding Rick Fenn, Tony O'Malley, and Stuart Tosh was established to cover all the parts and fill out the sound. The tour was a major success and resulted in the release of the first live album Live and Let Live (1977) which was recorded on this tour. The setlist focuses strongly on the new album, including 8 of the 9 songs from Deceptive Bends, along with favorites from the earlier albums. The concert posted here today is from later in the tour, from Japan. It is an audience recording, but overall has quite good sound, and again, there just are not very many unofficial live shows from 10cc available, so this is a nice treat.

Tracklist:
1 The Second Sitting For The Last Supper
2 You've Got a Cold
3 Honeymoon With B Troop
4 Wall Street Shuffle
5 People In Love
6 Band intro
7 Art For Art's Sake
8 Ships Don't Disappear In The Night (Do They?)
9 I'm Mandy Fly Me
10 Marriage Bureau Rendezvous
11 Good Morning Judge
12 Feel The Benefit
13 Waterfall
14 The Things We Do For Love
15 I'm Not In Love
16 Modern Man Blues

I was expecting to see 10cc at the Auditorium Theatre on July 31st, until a Chicago police officer informed the small band of us who had assembled at the Auditorium's entrance that the show had been cancelled.

Very curious to hear what I missed.