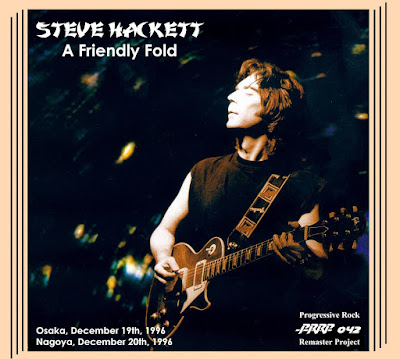 OK, this one is by request. Here is the last night of Steve Hackett's limited (4-night) 1996 concert tour in Japan, and second half of the PRRP-042 release A Friendly Fold, which featured an all-star prog back-up band (with John Wetton and Ian MacDonald of King Crimson fame) and Steve's re-interpretations of Classic Genesis tracks (following the release of Genesis Revisited). A wonderful show. Although the setlist is the same as the previous night in Osaka (which was previously posted here earlier this year), it's still a treat to hear these progressive pros at work in this show. So, this completes that set of concerts. And although there is nothing played here that would constitute Christmas music, I'm still counting this as a Christmas Concert because it happened during the Christmas Holiday Season, and I'm sure it was a wonderful Christmas gift for all who attended, as well as for Julio, who requested I post this show. So, Ho Ho Ho, here's Steve's version of a Christmas show.

zyppishare doesn't works in italy
it's possible reloading on mega?
thanks anyway