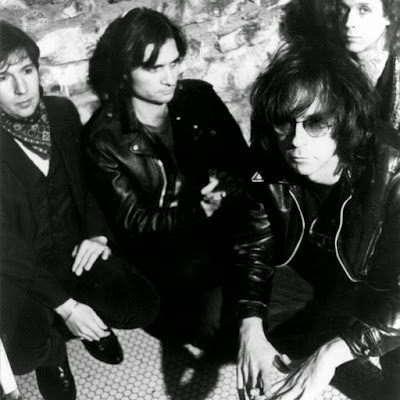 To close out the year, and the entire decade for that matter, here is a New Year's Eve show from 1986 featuring that rockin' 80's power pop band, The dB's. Hard to believe that I have not posted any dB's until now. The dB's were a band from Winston-Salem, NC, formed in 1978 with original members Chris Stamey (guitar, vocals, songwriting), Peter Holsapple (guitar, vocals, songwriting), Gene Holder (bass), and Will Rigby (drums), featuring a sound and style somewhat reminiscent of 60's-70's pop and psychedelia, but with a harder edge. Their first album, Stands for Decibels, was released in 1981, followed by Repercussion in 1982, and both were highly praised, but little bought at the time. Stamey left the group after that for a solo career, but the band continued, releasing Like This (1984), and adding Rick Wagner on bass and Holder moving over to guitar. Their major label breakthrough came with an I.R.S. record deal and the album The Sound of Music in 1987, as well as the arrival of Jeff Beninato on bass (and departure of Wagner). And although the album was again highly praised, major success did not follow (although the album did finally crack the Billboard 200, at #171)), and the band broke up not long after. But as so often happens with bands like this, their music became more popular after they were gone, with earlier albums being re-released, as well as live and compilation albums of miscellaneous tracks over the years. Holsapple went on to work with R.E.M., Hootie and the Blowfish, and the Continental Drifters, Holder joined The Individuals, and Rigby joined with Steve Earle. In 2005 and 2007, the band's original lineup got back together for limited reunion shows in Chicago, New Jersey, New York, and North Carolina, and then in 2012, the re-formed band released it's first new studio album in decades, with Falling Off The Sky.
This raucous NYE show highlights the band in 1986, prior to their 1987 IRS album, primarily featuring songs from Like This and Sound of Music, as well as some surprises. Thanks to Rob-in-Brevard at dbs-repercussion blog for making this show available (and particularly the recent addition of lossless), and FYI, if interested in further musical adventures of The dB's and their cohorts, be sure to check out Rob's blog, as it is chock full of all things dB's and related offerings.

Cheers, BBK. Your blog is looking fab, as usual.