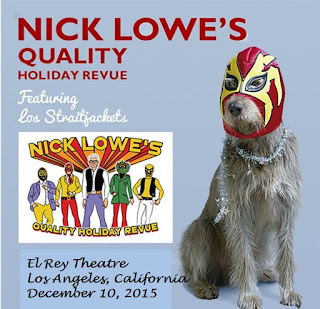 Now that we've entered into the Christmas Holiday Season, it's time once again for some Holiday-themed live shows. Here's a cool show from a few years ago that featured the unexpected pairing of rock legend Nick Lowe with Los Straitjackets for a series of Holiday shows in 2015. Los Straitjackets, of course, are a throwback to the instrumental guitar bands of the 1960's (such as The Ventures, The Shadows, Link Wray, and Dick Dale) playing hits from that era as well as newer songs played in that style. They're a lot of fun to see live, and their pairing with Nick Lowe works well. They play a mix of their respective hits, with numerous Christmas songs thrown in, mostly taken from Nick's recent Christmas album, Quality Street (2013).  It's a fine show and great holiday fun.