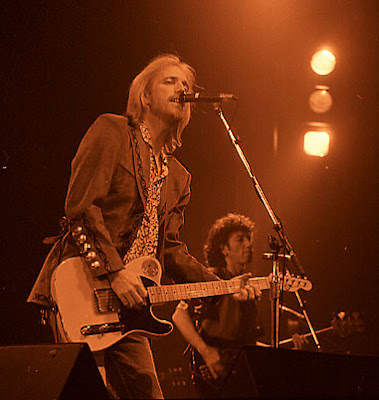 Sorry for the gap in posts, just been very busy and traveling extensively all through November, but I'm back now, and ready to continue this chronological tribute to Tom Petty's live shows.

When we last left Tom and the band, they were finishing up their hugely successful Full Moon Fever tour in 1989. Following that tour, Tom continued to work with Jeff Lynne as a producer, both for the second Traveling Wilbury's album (Vol. 3, released in 1990), as well as on Tom's return to The Heartbreakers, the 1991 album, Into The Great Wide Open, which nonetheless continued right where Full Moon Fever left off. At this time, Tom's contract with MCA was winding down, and Tom had actually already secretly signed a new lucrative contract with Warners Bros. For their last action with MCA, Tom & The Heartbreakers recorded a couple new tracks to be included in a greatest hits package, as part of MCA's contract. This was also the last session for drummer Stan Lynch with the band, as he left soon after, not happy with his status in the band and Tom's forays and success outside of the Heartbreakers. The single album greatest hits collection was released in 1993. The new songs were 'Mary Jane's Last Dance', and a cover of Thunderclap Newman's 'Something in the Air', of which 'Mary Jane...' became a major hit, and the album went on to sell over 12 million copies in the US alone. I have previously posted Tom's triumphant concert return to his hometown, Gainesville, FL, that year (1993-11-04 show), and I will update that show to include a FLAC version ASAP.
Tom's first new album on his new label was another 'solo' album, his second, Wildflowers (1994), and was another masterpiece (and critical and commercial success), once again expanding his overall sound and style beyond what The Heartbreakers were known for (but as with the previous solo album, all The Heartbreakers contributed, and, in fact played on most of the songs). It included the hit singles 'You Don't Know How It Feels', 'You Wreck Me', 'It's Good To Be King', and 'A Higher Place', and went multi-platinum. So, when Tom & The Heartbreakers went out on tour in 1995, in what was dubbed the 'Dogs With Wings' Tour, the setlist incorporated numerous tracks from the new 'solo' album. Drummer Steve Ferrone was brought in to play on the Wildflowers album, and subsequently also played with the Heartbreakers and on tour, but was not officially named as a member of The Heartbreakers until a few years later. Here is an excellent recording of a great show from the 1995 tour. Although much of the setlist is similar to that played in the 1993 Gainesville show, these shows now featured 5 new songs from the excellent Wildflowers, as well as a fun cover of the The Ventures' surf-guitar instrumental 'Diamond Head' (where Mike Campbell gets a chance to really stretch out), and an original song that was only played live, but never recorded, 'Drivin' Down to Georgia', as additional treats. Listen as Petty soars into the '90's'.

Great show, again, thanks for the Petty shows. As great a drummer as Steve Ferronne is, I miss Stan Lynch. He had that certain something, Again, many thanks, and keep them coming. Never enough TP !