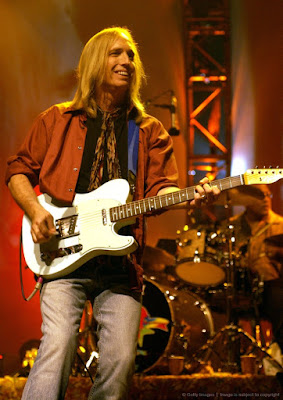 Continuing with Tom Petty's Musical History. By 2001, Tom had recovered from his heroin addiction and had just married Dana York, whose relationship had re-charged his life. And by the end of 2001, The band learned they would be inducted into the Rock and Roll Hall of Fame. But the latter months of 2001 also were filled with tragedy, from the 9/11 terror attack to the death of Tom's friend, George Harrison. And although Petty was now clean and drug-free, bassist Howie Epstein was mired ever more deeply in drug addiction and was no longer able to function in the band. Petty and the rest of the band tried everything they could to get help for Epstein and get him through this, but Howie just kept going back to drugs. Finally, the band had to just move on without him. On their next album, Petty and Mike Campbell played bass on most of the songs, and then they brought back original bassist Ron Blair to play on a couple tracks, and then to join them on their 2002 tour, and eventually, full-time back as a Heartbreaker. Tragically, Howie Epstein would later die of a heroin overdose in 2003. For that next album, which became The Last DJ (2002), Tom still had some things gnawing at him that he wanted to get off his chest, and several songs on The Last DJ were sharp attacks on the Music Industry, their greed and unfair practices. Because of this, the album was unsurprisingly not well-received by the industry, and it became one of the band's least heard and poorest-selling albums. But, also not surprisingly and as usual, the album actually contains many very good songs. Here is a show from their 2002 tour, an audience recording, but with excellent sound quality. This show was actually from earlier in the year, before The Last DJ was released, so there were only 3 songs from the new album featured ('Have Love Will Travel', 'Lost Children', and 'Can't Stop the Sun'). Later in the tour, around the time of the album release, many more songs from the album were played, so I have included 4 additional songs from The Last DJ that were played at the November Las Vegas show. Check out another great show as well as the new Last DJ songs (Note: There actually was one more Last DJ song played at the Vegas show, 'Good Kid Gone Bad' -for a total of 8 new songs from the album in that show!, but the recording for that one was messed up, so I did not include it here.

I do not know why, but I'm trying to get past the 500MB mark, & mega seems to stop there

I've tried to download this, on Friday, & no luck..Mega, just stops, the link, Why?

Sorry, but the problem must be on your end (your system, provider, etc.). I just tested and downloaded the file flawlessly. Everything worked fine. Sorry for the problem, but nothing I can do.

Thank you, and Merry Christmas!

No problem here with the download,much appreciated.Im still trying to come to terms with the fact that Tom is gone.We have lost so many greats in the last few years,Lou Reed ,David Bowie,Glenn Frey,Prince,Leonard Cohen,Gregg Allman just to name a few,but this one is more devastating than the rest.Tom unlike many of the others seemed like one of us.The friend or brother you never met but felt like you knew him.Tom was never a celebrity seeker,although he accepted his fame with appreciation and humbleness .He seemed approchable unlike many others who seemed consumed with fame.keep em coming.More from the 85 and 87 tours would be most welcome,thanks again.

Well said, Bill. This one seems surreal.
Not to be particular for requests,, but I have a preference for the band with Stan Lynch. Nothing against Steve Ferrone, he's a great drummer, but Lynch had that something special.
Thanks again for all the great shows so far.