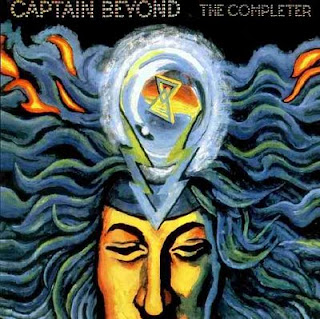 Here's something a bit different for this blog, a collection of live recordings from Captain Beyond, a renowned, short-lived, and underappreciated '70's progressive/heavy rock band. I dug this out from old files for a request from another forum, and figured I should post it here as well, for anyone interested. Captain Beyond was formed in 1971 from the remains of other notable heavy rock bands of the time, with Rod Evans (from Deep Purple) on vocals, Larry "Rhino" Rheinhart and Lee Dornan (from Iron Butterfly) on guitar and bass, and Bobby Caldwell (from Johnny Winters) on Drums. They played a unique blend of progressive-psychedelic-heavy metal-space-rock, as featured on their first album (Captain Beyond-1972). Although now considered a classic, poor promotion (from southern-rock oriented Capricorn records) resulted in dismal sales and little recognition. Drummer Bobby Caldwell had already left before their second album, the slightly more commercial, yet still wonderful, Sufficiently Breathless-1973). However, vocalist Rod Evans left shortly after, essentially ending the band. But they re-formed in 1976 (without Evans, but with Caldwell back, for one more album in 1977). Here is a 'bootleg anthology' consisting of multiple dates from 1971 (their debut concert at Montreaux) to the reformed band in 1977. Since there are few surviving live recordings of this band, this is a rare treat from a unique time in progressive rock.

Can you re-post this in flac?

Unfortunately, no, this is the only version I have of this, obtained many years ago from a forgotten blog (thus the 192k bitrate). And I have not seen it available in any higher resolution versions since then either, so please enjoy what we have. Thanks.

thx for all the posts you put up.
this link is dead. is it possible to re-up it plz?