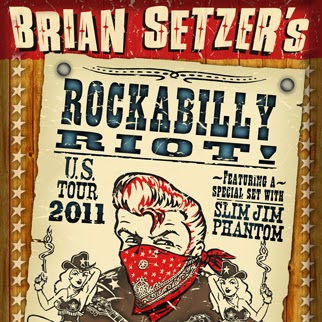 Here's some more from Brian Setzer, but this time, rather than with his Big Band/Swing Orchestra, this is Brian going back to his roots and his core sound, with a stripped-down rockabilly group featuring Brian's guitar backed up by 2 bass players (upright bass, of course), 2 drummers, and piano, and presenting his Rockabilly Riot show from 2011. The set features original and classic rockabilly songs, as well as several of Brian's solo and Stray Cats numbers, all done in an energetic, rockin' romp. Note: This show is from his 2011 Rockabilly Riot tour, and contains the full show. Most of these songs were also featured on the official live album release from this Tour (Rockabilly Riot! Live from the Planet - 2012), but whereas that album contains individual songs recorded from many locations from throughout the tour, this is the complete Austin show. Also, since this was recorded in 2011, it does not contain songs from Brian's most recent album of original songs, which is also titled Rockabilly Riot (Rockabilly Riot! All Original - 2014). This is also not to be confused with an earlier Setzer album, titled Rockabilly Riot! Volume 1: A Tribute to Sun Records (2005), where he recorded covers of the early rockabilly songs of Sun records. So, yeah, Brian is a strong believer in Rockabilly rioting. Anyway, this is a fun show, letting Brian rockabilly riot right through to the end.

I don't know if you have this Kinks bootleg.

Narrow Dog,
Yep, already got it, but thanks for the notice and link.