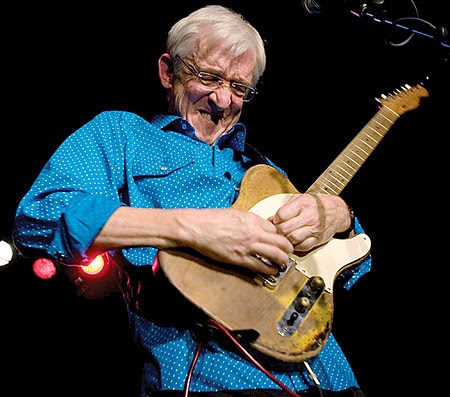 When the original Commander Cody and His Lost Planet Airmen broke up around 1976, ace guitarist Bill Kirchen already had another band going, called the Moonlighters, which started as a sort of 'swing orchestra', but over the next several years were stripped down to become more of a pub rock-new wave band (and also included former pub-rock pioneer, keyboardist Austin de Lone, from Eggs Over Easy). They released 2 albums and lasted through the early eighties. After which Bill moved to the Wash. D.C. area and formed his trio-based band, Too Much Fun (named after his classic CC-era song). In addition to Too Much Fun, through the eighties and nineties, Bill played, recorded, collaborated, and sometimes even toured with such artists as Nick Lowe, Elvis Costello, Gene Vincent, Link Wray, Doug Sahm, Emmylou Harris, and others, as well as occasional Commander Cody reunions and incarnations, establishing himself as a great guitarist, the originator of his classic style and sound, and all-around great guy. In 1994, Bill released his first solo album, Tombstone Every Mile, followed by Have Love, Will Travel (1996) and Raise a Ruckus (1999). He has continued playing and releasing both old and new new music through the years, with a total of 10 solo albums. His music has been called Roots, Americana, etc., it is a unique mix of rockabilly, country, blues, rock, swing, boogie-woogie, and truck driving songs, which he has dubbed 'Dieselbilly' (commemorated in his 2005 album, King of Dieselbilly). He is known for his mastery of his favorite instrument, the Fender Telecaster guitar (although he originally started out as a trombone player), and has been named the "Titan of the Telecaster" by Guitar Player Magazine for his unique contributions and abilities. Bill has even recorded a musical tribute to the Telecaster, the title cut of his 2006 album, Hammer of the Honky Tonk Gods, in which he describes the axe as 'born at the junction of form and function, the hammer of the honky tonk gods'.  I first saw Bill live about a dozen years ago, with his Too Much Fun trio, and I was just blown away by him, his style, his performance, and his easy-going charm. I saw him again this summer, and was awestruck and delighted all over again. He continues to play a mix of the old Commander Cody songs and his own catalog of songs from his many albums, of which he has many that have also become classics. However, his signature song at his shows remains his epic live version of  'Hot Rod Lincoln', an extended gem that contains an encyclopedic rundown of classic and iconic guitar riffs from all the great country, blues, and rock artists, from Johnny Cash to BB King to The Beatles, Stones, Clapton, and Hendrix, to the Sex Pistols, in one non-stop torrent of great guitar-playing fun (check out his extended 'Hot Rod Lincon' on YouTube, cause you gotta SEE him playing it too). Just a joy to hear and see, and such a nice guy, too. So, here today, I have a show from his Too Much Fun trio configuration from several years back, a nice recording that features a good mix of his solo songs (such as 'Get a Little Goner', 'Rocks in the Sand', 'Hammer of the Honky Tonk Gods', etc.), covers, and Commander Cody oldies, including his inimitable epic 'Hot Rod Lincoln'. So check it out. As Nick Lowe himself said about Bill Kirchen, "A devastating culmination of the elegant and the funky, a really sensational musician with enormous depth."