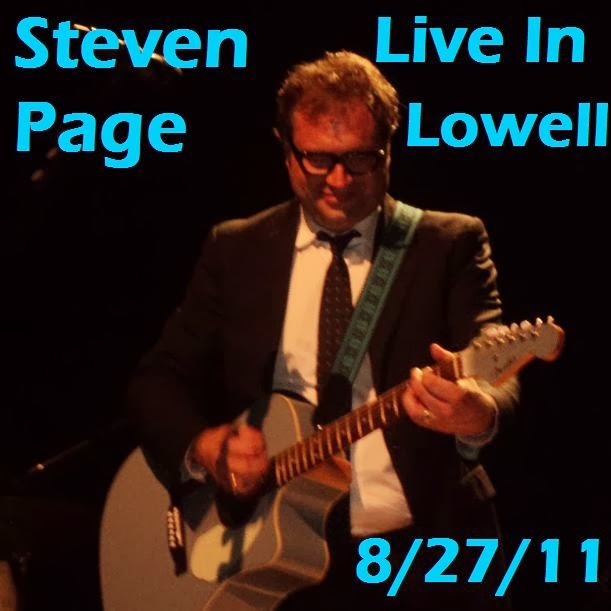 While we are covering the topic of recent Barenaked Ladies shows, how about taking a look (listen) at what former 'Ladie' Steven Page has been up to? In 2009, founding bandmember vocalist/guitarist/songwriter, after 20 years with the Barenaked Ladies, announced that he was leaving the band to pursue other opportunities (solo projects, theater, etc). From the very beginning of the band, Page had been the primary lead vocalist and songwriter, but as the years went on, guitarist Ed Robertson began taking on more lead and shared vocals with Steve, as well as writing more songs, both with and without Steve as a partner. Later, with the emergence of keyboardist Kevin Hearn and bassist Jim Creegan also starting to contribute songs and singing lead, Page's role and influence was somewhat diminished. Increasingly at odds with the choices and musical direction of the rest of the band, and wanting greater input and a more consistent outlet for his songs and musical vision, it was inevitable that he would part ways with the band at some point, which came in 2009. Although like all BNL fans, I wish that he were still a part of the group, I actually am quite OK with the split. I think it came at just the right time, was needed for both Steve and the remaining BNL to grow as musicians and artists, and was just the right thing for all concerned. They had a great run together as BNL, but it was time for Steve to move on. Of course, the rest of BNL continued on without Steve, and has fared quite well, overcoming some early insecurities as a quartet, and delivering two fine and succesful albums (All in Good Time-2010 and Grinning Streak-2013) since the split (and great live shows, too), with each member thriving with their increased roles (yes, the new albums are decidedly different from the 'old' BNL, but still solid albums). Steve, also, has been free to pursue more diverse activities, from writing for the theater (Bartholomew Fair:A Comedy), performing with The Art of Time Ensemble, contributing songs to movies, and releasing a solo album, Page One (2010). Unfortunately, although his solo album is very good, showing off his diversity of influences, styles, and sounds, it did not get a very good reception from the public. While the BNL albums did very well on the charts (both reaching the top 25 in the US and top 10 in Canada), Steve's album was pretty much ignored by the media (no coverage or radio airplay) and public alike (failed to chart in US, and only reached #58 in Canada - where all BNL projects usually do very well). Steve and his music deserve better. Since then, Steve has only released a single ('A Different Sort of Solitude'/'Manchild' - 2012, A-side from the film French Immersion), but hopefully is at work on more songs for another solo album. So, Here is Steve in 2011, touring in support of his Page One album, with a fine audience recording of a very good show. This show features many (7) songs from the Page One album, numerous BNL songs, as well as a few from his previous solo album project (The Vanity Project, 2005, while still with BNL - also a very fine album BTW). So, come check out Steven Page, on his own and doing fine.