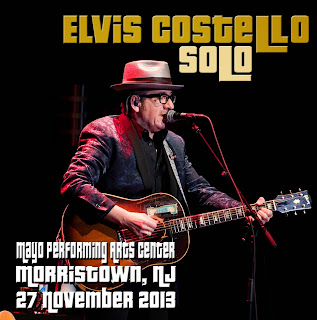 Elvis Costello's recently completed 2013 Solo Tour was a spectacular event for all those fortunate enough to experience it. This limited run series of solo shows consisted of only 19 shows up and down the East Coast of the US during the month of November, but each and every show was totally unique and amazing, as Elvis thrilled all his true fans with the musical depth and breadth of his repertoire that he managed to cover during these shows. This was no 'greatest hits' exercise, as Elvis outdid himself with the range of music and songs he played (and played so very well) night after night. Each show had an almost totally different setlist from any other, with Elvis only repeating from show to show about a half dozen of the 28-30 songs played per night ('Alison', 'Tripwire', 'Peace Love and Understanding', 'Walkin' My Baby Back Home', 'A Slow Drag With Josephine', and 'Jimmie Standing in the Rain' were the only songs played at nearly all the shows). Instead, each show contained a heady assortment of songs selected from all throughout his career, from his earliest days before being discovered to his latest compositions, including many obscure or otherwise not well-known songs, but all that have some importance or meaning to him (as he often explained during the show).  Each show seemed to contain several songs that were not played at any other show of the tour, as well as many that were only played at a few other shows, giving fans a chance to experience songs that they never thought they would see Elvis perform live. Over the course of these 19 solo shows, Elvis performed an astonishing total of nearly 200 different songs (and that doesn't even count the many little snippets of other songs he often incudes within songs). How can he keep them all straight (and all those lyrics) in his head? Listed below is a link to the Elvis Wiki site that includes the complete show by show setlist and song matrix of the tour to check out this amazing tour.

As mentioned previously, I was able to attend one of the shows (11/19, Orono, ME), at the University of Maine Campus, and what a treat it was. Although I have seen Elvis multiple times before, this was the first solo show I saw, and getting the chance to see him play up close and personally, in a smaller venue like this, with this diverse, eclectic setlist, not to mention him playing here so close to my home, was just a sensational, precious, priceless experience. And at the show I saw, he did play some of the songs that I most wanted to hear him do (such as 'Poison Moon', 'Beyond Belief', and 'Man Out of Time'), and many other favorites (multiple songs from My Aim is True and Imperial Bedroom among others), as well as several songs of his I had never heard before. As another fan described the tour, "spectacular, full of seemingly once-in-a-lifetime things every single evening".  Audience recordings for some (but not very many) of the shows have begun to emerge. Here, I have a very good recording (from larryrulz), available from the Elvis Wiki site, for the very last show of the tour, and Elvis pulls out all the stops here, doing an even longer set than any other show (even he did not want the tour to end), for a sensational closing show. Here it is.

Setlist:
01 This Year's Girl
02 Cinco Minutos Con Vos
03 High Fidelity
04 The Judgement
05 Harry Worth
06 Sugar Won't Work
07 Imagination (Is A Powerful Deceiver)
08 Come The Meantimes
09 Worthless Thing
10 King Of Confidence
11 Poor Napoleon
12 Indoor Fireworks
13 Veronica
14 Walkin' My Baby Back Home
15 Ascension Day
16 Wave A White Flag
17 White Knuckles
18 Watching The Detectives
19 My New Haunt
20 applause
Encore
21 If I Could Believe
22 Oliver's Army
23 Alison
24 It Tears Me Up
25 A Slow Drag With Josephine
26 Harpies Bizarre
27 Radio Soul
28 The Name Of This Thing Is Not Love
29 Riot Act
30 (What's So Funny 'Bout) Peace, Love And Understanding?
31 Tripwire / (What's So Funny 'Bout) Peace, Love And Understanding?
32 The Puppet Has Cut His Strings
33 Almost Blue
34 Couldn't Call It Unexpected No. 4
35 Man Out Of Time
36 All These Strangers

The entire show was also captured on video and can be watched on YouTube here:
http://www.youtube.com/watch?v=oOWI0-NcpDw&list=PLx7OzIA-nsBtsEnRLNix7hyEk1SR3mmpg

The Elvis Costello Wiki site has a great song/show matrix with all the details regarding the 2013 Solo Tour:
http://www.elviscostello.info/wiki/index.php/2013_US_Solo_Tour

Hi BBK, merry christmas, I found this link for Ec BBC radio sessions 1977 to 83. Downloading now, so I don't kknow waht the quality is like. All mp3, enjoy.