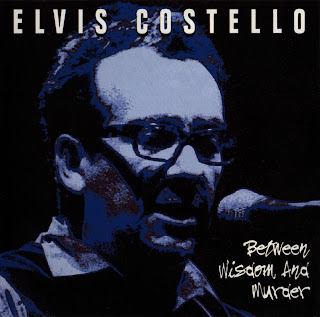 Continuing with Elvis in the nineties: After the triumphant Brutal Youth Tour (1994), 1995 was a relatively quiet year. Elvis did some shows with the Brodsky Quartet early in the year, as well as opening (solo) sets for Bob Dylan at some UK dates. And then with no new album to release, Elvis decided to finally release his covers collection, Kojak Variety (which was recorded in 1991) in May 1995. Elvis did some limited promotional TV, radio, and concert
appearances throughout the year with the Attractions, but released with minimal promotion (as well as that it was all covers, no original songs), the album sold poorly. By late 1995, Elvis had begun incorporating more new songs into the sets, and was ready to go back to the recording studio. The next album
was originally envisioned to feature songs that Elvis had written for other artists to record (or collaborate with), would feature various lineups of musicians, was to be called A Case for Song, and would possibly even be a double album, as Elvis had around 40 songs he was considering for inclusion. However, as the
sessions developed, it was decided to cut it down to a single album, and do most of the songs with the Attractions. Eventually, the released album was called All This Useless Beauty, released in May 1996, and turned out to include primarily ballads and slow songs. At this time Elvis began doing a series of shows only backed by Attractions keyboard wizard Steve Nieve. These shows had the feel of Elvis's more personal solo shows, but with the added depth of the accompanying keyboards from virtuoso Nieve. Later in the year, the full Attractions band would play with Elvis for tours through Europe, the US, and several dates in Japan, for what would be the last time ever. And even at the full Attractions shows, there were many songs that were done with just Elvis and Steve. The primary conflicts were between Elvis and bassist Bruce Thomas, which seemed to escalate through the tour, and ended in Japan (last show, 9-15-96) with Elvis announcing the dissolution of the group (I will try to post one of these last shows w/ the Attractions, if I can find my files of them). But right now, here is one of the duo shows with Elvis and Steve Nieve, a very good FM recording from one of the New York shows in May 1996.

Thank you very much for this show.