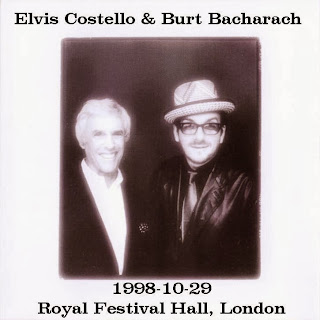 After the 1996 tour, and the break-up with The Attractions, in early 1997 Elvis worked with songwriting legend Burt Bacharach on a song for a film soundtrack ('God Give Me Strength' for the Film Grace of My Heart). The collaboration was so enjoyable and successful that they agreed to continue working together to produce an entire album of music, which became Painted By Memory, released in 1998. (Elvis's only album release in 1997 was a greatest hits package,  Extreme Honey, which completed his record deal with Warner Brothers). In early 1998, Elvis played several dates with Steve Nieve again, and then did many TV and radio promotional appearances with Bacharach, as well as a limited number of concert shows throughout the year, with Bacharch, Nieve, and in many cases a full orchestra accompaniment. The album received much critical acclaim, features Elvis in full crooner mode, and fits in well with both Bacharach's and Costello's body of work. Here is a sampling from the live shows, this taken from a full-length concert at Royal Festival Hall in London, portions of which (12 songs) were broadcast by the BBC. This version alson contains a few additional songs that were included in the German (WDR) broadcast of the show. So, here you get an expanded edition (although still short of the full concert, which included about 26 songs). But check out Elvis here crooning his Bacharach collaborations with Nieve and full Orchestra.
Elvis closed out the millennium primarily by continuing his duo tours with Steve Nieve (Elvis and Steve alone) throughout 1999, with an extensive world tour.

Tracklist:
From BBC Broadcast
01. Toledo
02. Tears At The Birthday Party
03. Make It Easy On Yourself
04. Painted From Memory
05. What's Her Name Today?
06. Accidents Will Happen / Twenty Four Hours From Tulsa
07. Just A Memory
08. Alison
09. In The Darkest Place
10. The Sweetest Punch
11. My Little Red Book
12. Anyone Who Had A Heart
Additional tracks from WDR (German) Broadcast
13. Such Unlikely Covers
14. I Still Have the Other Girl
15. God Give Me Strength

This wraps up my brief look at 'Elvis in the Nineties', but next I will jump forward to feature an Elvis show from his utterly fantastic and just-completed 2013 East Coast Solo Tour, which I had the great fortune to be able to attend.

Thanks for all the posts.

HI BBK, Just found a live link to the above show on Guitars 101.

There is a link to a list of EC shows from the 1977 tour well worth looking at.