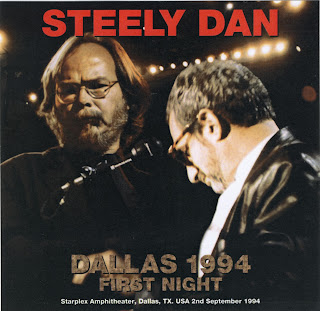 OK, here's a another recent find that has already appeared on a number of other blogs, but this is just too good to not post here as well. What we have here is a superb-sounding soundboard recording from the 1994 'Dan Tour. This is easily the best quality recording available from this tour, and likely one of the best-sounding 'Dan boots from any tour, so this is some great stuff, that apparently has only recently become available.
Although I personally much prefer the early 'Rock Band' Dan of the 1974 tour to the later 'Smooth Jazz' Dan of these later tours, still, any year Steely Dan is great stuff, and for these initial reunion tours of 1993-1994 it was soooo good to finally get to hear Steely Dan live again after so many years (like almost 20?) of no Live Dan shows. So, here we have a fantastic recording and a great show, featuring a similar, but still somewhat different, setlist from that featured on the 1993 tour (as indicated in 1993 St.Louis show previously posted here. This time, we still have 2 tracks from Becker's solo album '11 Tracks of Whack', but they are 2 different songs this time ('Down in the Bottom' and 'Hard Up Case' replaces 'Book of Liars' and 'Fall of '92'). This show, surprisingly, does not contain any songs from Don's solo albums (previously, they had featured 'IGY' and 'Green Flower Street' from The Nightfly, and 'Teahouse on the the Tracks' from Kamakiriad), but that allows them to feature more Steely Dan tracks, including 'True Companion', 'Aja', 'Kid Charlemagne', 'Sign In Stranger', and 'FM', that were not played at the previous year's St.Louis show, so we get to hear several different songs this time around, as well as the great rest of the show as previously featured, and, again, in wonderful quality. Enjoy!

Thanks to T.U.B.E. and BigO Worldwide, where I first became of (and obtained) this show, for making it more available.

Thanks! This is great. And, slightly to my surprise, it rocks plenty. Trivial correction: "Tomorrow's Girls" is from Kamakiriad, so Fagen's solo career is at least represented.

True Companion is a Fagen tune as well.